Filling up Tanks at Camp Granite in 1943 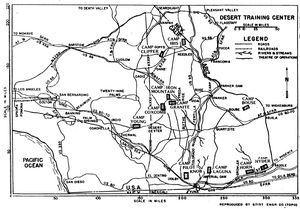 Built in the spring of 1943, Camp Granite was built to prepare troops to do battle in North Africa to fight the Nazis during World War II. The original camp had to quickly be move higher ground due to flooding. At Camp Granite were stationed the 90th Infantry Division and 104th Infantry Divisions. Among the smaller units known to have been stationed at Camp Granite were the 76th Field Artillery Regiment and the 413th Infantry Regiment. XV Corps (United States) used Camp Granite as there headquarters from July- 1943 to November 1943. When completed the camp had 40 shower buildings, 157 latrines, 191 wooden tent frames, and a 50,000-gallon water tank.

The army used live-fire exercises and warning signs are still on the site.

The camp used the near by US Army Camp Iron Mountain Airfield for air support.

Palen Pass in the Palen Mountains was the site of major maneuvers. The pass was both used as a place for troop to built defenses and as target for artillery training. Lockheed P-38 Lightnings bombed and attacked ground targets in the pass on August 20, 1943.

All content from Kiddle encyclopedia articles (including the article images and facts) can be freely used under Attribution-ShareAlike license, unless stated otherwise. Cite this article:
Camp Granite Facts for Kids. Kiddle Encyclopedia.