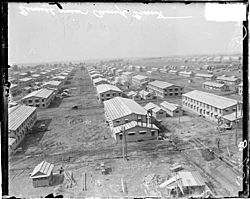 Established in 1917, Camp Grant saw its first "selected men" or draftees arrive in September of that year. Primarily a location for training infantry, it became one of the largest military training facilities during World War I. The 86th Infantry Division (Black Hawk Division) was formed there. Men of the 86th, after their initial training were sent to other units. While never serving as a division in combat during World War I, elements saw combat. One regiment, the 332nd Infantry, saw service in Italy. The 172nd Infantry Brigade was organized at Camp Grant. It is worth noting that in 1918 the Spanish Influenza Pandemic affected over 4,000, taking the lives of over 1,000 soldiers at Camp Grant between the 23rd of September and the 1st of October. Camp Grant was closed as a U.S. Army facility by December 1923, but in January, 1924, was turned over to the Illinois National Guard.

The inter-war period also saw Camp Grant used by the Civilian Conservation Corps between 1933 and 1935.

In October 1940, Camp Grant was re-activated as an induction center, being transferred by Illinois back to the federal government. Physical exams and medical training post for draftees was the main focus, although a fair number of personnel went through Camp Grant for their Army basic training. It is estimated that 100,000 medical corpsmen were trained at the camp. During the war, Camp Grant also served as a POW detention center, employing upwards of 6,000 civilians, boosting Rockford's economy. It is estimated there were 2,500 POWs in the camp. After the war, Camp Grant also served as a separation center for returning GIs.

In 1946, Camp Grant was permanently closed. The Chicago Rockford International Airport occupies much of the land that used to be Camp Grant. For a few years after the war, the barracks buildings of Camp Grant were converted into makeshift apartments. These 'homes' were utilized by returning GIs that had young families. By the late 1940s, many of Camp Grant's buildings were torn down and residents moved out. In the 1950s, much of the remaining camp land was in the possession of Seth B. Atwood, who would later donate former Camp Grant rifle range to the Rockford Park District, who would name it the Seth Atwood Park.

Camp Grant serves as the setting for the book, Taps for Charlie by Carl Brown.

It was mentioned in M*A*S*H Season 5, episode 17 by Colonel Potter.

They camp is also meantioned in the series "Boardwalk Empire" by the character James "Jimmy" Darmody as his basic to a young Al Capone in the pilot episode. Season 1 Episode 1.

All content from Kiddle encyclopedia articles (including the article images and facts) can be freely used under Attribution-ShareAlike license, unless stated otherwise. Cite this article:
Camp Grant (Illinois) Facts for Kids. Kiddle Encyclopedia.