The Canadian Pacific Building is a 15-storey highrise at 69 Yonge Street in the city's downtown core of Toronto, Ontario, Canada designed by the architectural firm of Darling and Pearson. When completed in 1913 as corporate headquarters for the Canadian Pacific Railway, it was the tallest building in Canada and the British Empire. 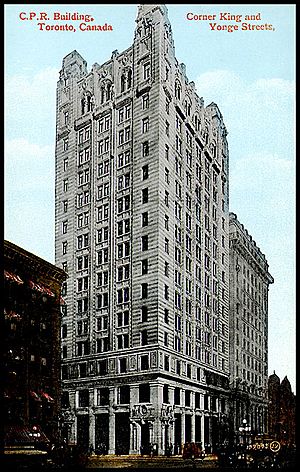 The Canadian Pacific Building was erected at a time when "the Canadian Pacific Railway was enjoying its greatest period of prosperity under the leadership of Sir Thomas Shaugnessy". The railway wanted to incorporate various corporate offices around the city in one location. The location contained a ticket office for the convenience of customers, to avoid them having to head down to Union Station to purchase tickets; by 1990 the original marble ticket office had been removed to make way for a drug store. Construction started in 1911 and was completed by 1913. The ground floor contained a two-story marble lobby and ticket office as described above. Above the ticket office were various other company functions, including the lucrative telegraph business. The railway had plenty of space left in the building available to be leased out to other business tenants. Built in an Edwardian Style, it was a "dramatic change from CPR's Chateau-style of architecture".

The building was one of four erected at the corner of King and Yonge Streets in Toronto around the same period, all of which still exist (as of 2001). They have since been eclipsed by much taller buildings in the area. The structure featured "cream enamel terra cotta on four elevations, manufactured by [the] Northwestern Terra Cotta Co. [of] Chicago".

By 1929, its original ornate terracotta exterior proved to be unable to sufficiently withstand Canadian winters. Over the course of one year and a half, under the supervision of its original architects Darling and Pearson, it was reclad with Indiana Limestone from the fourth floor up, with the original granite on the first three floors untouched. The Canadian Pacific Railway name no longer adorns the building, but traces of the name still remain on the walls.

The building remained in railway hands until it was sold in 1988 to H&R Development, who renovated it. As of 2017, the property entirely owned by H&R Real Estate Investment (a real estate investment trust); the property has a 100% occupancy rate, offering over 86 000 square feet of office space in total.

The 15 storey building was "designed in the Rennaissance Revival style according to Beaux Arts principles". It has a fire-proof steel skeleton, designed with a plinth, a shaft and an attic. On the plinth are Doric piers and cornice, four entrance doors with moulded surrounds and oversized transoms. Finally we notice clerestory windows. The tall shaft of the building shows balanced fenestration, pilaster strips, and pinnacles. Further up, the attic storey features an arcade of paired windows with balustrades, topped off with a parapet roof decorated at the four corner towers with cupolas.

The building is protected under Part IV of the Ontario Heritage Act, designated by the City of Toronto since 1990.

All content from Kiddle encyclopedia articles (including the article images and facts) can be freely used under Attribution-ShareAlike license, unless stated otherwise. Cite this article:
Canadian Pacific Building (Toronto) Facts for Kids. Kiddle Encyclopedia.