The Centre is sited in the heart of Canberra's City Centre, beside the ACT Legislative Assembly and backing onto City Hill, one of the apexes of the Parliamentary Triangle. 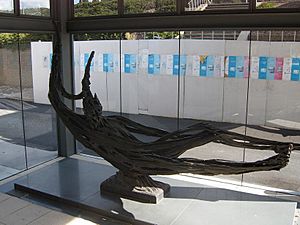 Thespis (1965), sculpture by Robert Cook, commissioned for the opening of the Canberra Theatre

Originally the complex was two separate buildings: the Canberra Theatre and The Playhouse, which were linked by a covered walkway.

1965: The Playhouse was officially opened on 18 August 1965 with a production of Peter Ustinov’s Romanoff and Juliet, produced by the Canberra Repertory Society.

1971: The covered walkway linking the two venues was enclosed to create more foyer and function space for the Canberra Theatre and improved box office facilities.

1982: The Courtyard Studio - a rehearsal room/cum 90-seat venue, administration offices, and a scene construction workshop including an electrically operated paint frame (used for painting stage set canvases), were completed. The Centre boasts one of the very few paint frames in Australia.

1988: The Canberra Theatre auditorium, foyer and link were extensively refurbished so that the facilities were comparable to those of other major performing arts centres throughout the country.

2006: A new library was built between the Canberra Theatre and the Playhouse, as well as a foyer linking the two theatres.

2007: The foyer and dressing rooms to the Courtyard Studio were refurbished. In addition lift access to the first floor Administration offices was installed

From the mid-1990s a two-year consultation process occurred between the Canberra Theatre Centre staff and the architects leading to the demolition of The Playhouse and its rebuilding as a new venue. It had a 'soft' opening in April 1998. The official opening was 16 May 1998.

Instead of a conventional fan shaped auditorium and proscenium arch stage used in most Australian theatres built in the 20th century, the design has the form of a semi circular drum with seating in the stalls and two balconies, with 'boxes'. The capacity is 618 seats. The design is reminiscent of theatres in Greece of antiquity and the Elizabethan theatres of the late 16th century.

The theatre has dressing rooms on two levels, wardrobe, a green room, a reception room and the foyer (with bar and cafe), which wraps around the drum.

Dame Margot Fonteyn performed with the Australian Ballet at the centre in October 1970. From the mid-1970s to the mid-1980s many international artists performed, including Dame Joan Sutherland. Canberra Opera presented a full-scale production of La Traviata and the Canberra Theatre Trust presented a performance of Gilbert and Sullivan's HMS Pinafore. Other performers during this time included the Bell Shakespeare Company, the Black Light Theatre of Prague and the Dave Brubeck Quartet. The Whitlams used the theatre during their early Australian tours in the early 2000s, and the Aboriginal Bangarra Dance Theatre performed here in 2006.

In recent years, the Canberra Theatre has housed several successful productions by Canberra-based Free Rain Theatre Company. These pro-am musical productions include Canberra premiers of The Phantom of the Opera in 2013, Mary Poppins in 2015, and both The Little Mermaid and Wicked in 2016.

All content from Kiddle encyclopedia articles (including the article images and facts) can be freely used under Attribution-ShareAlike license, unless stated otherwise. Cite this article:
Canberra Theatre Facts for Kids. Kiddle Encyclopedia.