Cane Creek is a stream in Georgia, and is a tributary of the Chestatee River. The creek is approximately 14.72 miles (23.69 km) long. 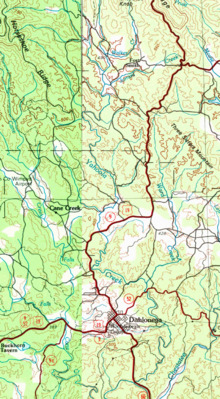 Topographic map showing Cane Creek in the western portion of the map, and the Chestatee River in the south 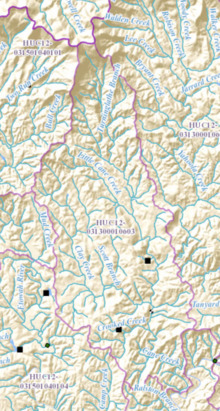 Map showing Cane Creek and its sub-watersheds (outlined in pink), and the Chestatee River

The creek watershed and associated waters is designated by the United States Geological Survey as sub-watershed HUC 031300010603, is named the Cane Creek sub-watershed, and drains an area of approximately 27 square miles north of Dahlonega. Clay Creek, which is 7.29 miles (11.73 km) long, and which joins Cane Creek at State Route 9/State Route 52, drains a significant portion of the west of the sub-watershed before joining Cane Creek, and picks up Peggy Branch and Scott Branch, as well as two unnamed branches, along the way.

All content from Kiddle encyclopedia articles (including the article images and facts) can be freely used under Attribution-ShareAlike license, unless stated otherwise. Cite this article:
Cane Creek (Chestatee River tributary) Facts for Kids. Kiddle Encyclopedia.