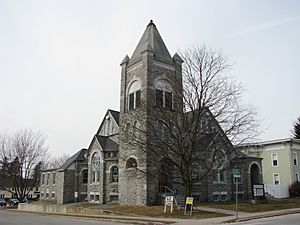 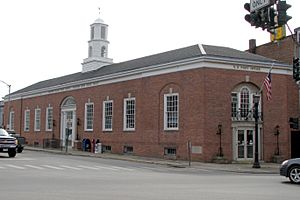 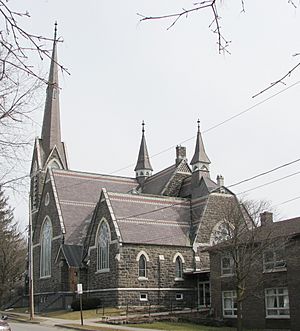 The village of Canton provides many municipal services such as a fully functional village highway department, water and sewer department, volunteer fire department, court system and a police department along with other municipal agencies.

The first attempt at settlement was made in 1800, but the first permanent settlement occurred in 1801. The first post office used the name "New Cairo," but changed to Canton by 1807. The early economy was based on farming and lumbering.

The village was incorporated in 1845. Between 1887 and 1889, the village was modernized with a sewage system, water works, and electrical lighting.

St. Lawrence University was founded here in 1856, and the State University of New York at Canton (northwest of the village) was begun in 1906.

In addition to Herring-Cole Hall Richardson Hall, and the Old Campus Historic District of St. Lawrence University, the Village Park Historic District and United States Post Office are listed on the National Register of Historic Places.

The village is located on the Grasse River, a tributary of the St. Lawrence River.

There were 1,531 households out of which 26.5% had children under the age of 18 living with them, 38.9% were married couples living together, 10.2% had a female householder with no husband present, and 47.9% were non-families. 38.9% of all households were made up of individuals and 14.4% had someone living alone who was 65 years of age or older. The average household size was 2.13 and the average family size was 2.86.

All content from Kiddle encyclopedia articles (including the article images and facts) can be freely used under Attribution-ShareAlike license, unless stated otherwise. Cite this article:
Canton (village), New York Facts for Kids. Kiddle Encyclopedia.