Kids Encyclopedia Facts
For other dams with the same name, see Canyon Dam. 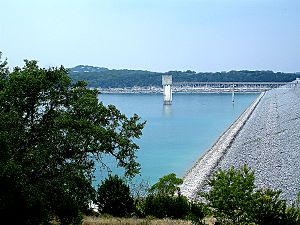 A view of Canyon Dam from the south.

The Canyon Dam in Texas is a rolled-earth dam on the Guadalupe River in the Hill Country. The water impounded by the dam forms Canyon Lake.

After major floods on the Guadalupe River in 1936 and 1938, state and community leaders pressured the federal government to help control flooding of the river. Congress authorized initial funds for construction of a dam in the Rivers and Harbors Act of 1945; final construction approval came in the Flood Control Act of 1954.

Construction of Canyon Dam began in 1958 to provide both flood control and water conservation. Impoundment of the lake began in 1964, and the lake was filled to its conservation level in 1968. The dam was built by the Tencon Corporation of Fort Worth, Texas. The United States Army Corps of Engineers controls the physical operations; and water in the lake is managed by the Guadalupe-Blanco River Authority.

All content from Kiddle encyclopedia articles (including the article images and facts) can be freely used under Attribution-ShareAlike license, unless stated otherwise. Cite this article:
Canyon Dam (Texas) Facts for Kids. Kiddle Encyclopedia.