Kids Encyclopedia Facts
This page is about the reservoir. For the census-designated place, see Canyon Lake, Texas.

Canyon Lake is a reservoir on the Guadalupe River in the Texas Hill Country in the United States. Canyon Lake is a U.S. Army Corps of Engineers reservoir formed on the Guadalupe River in Comal County by Canyon Dam, which is located about sixteen miles northwest of New Braunfels. The dam, lake, and all adjacent property are managed by the U.S. Army Corps Of Engineers. Water rights, waste water treatment, and hydroelectric generating facilities are managed by the Guadalupe-Blanco River Authority. Construction of the dam began in 1958 and was completed in 1964. The reservoir serves to provide flood control and water conservation for the communities downstream from the dam. The lake is also a popular recreational destination. 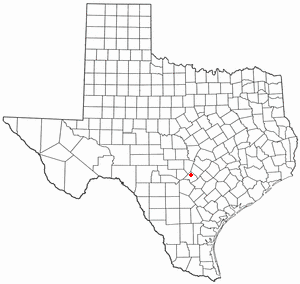 Canyon Lake is located at 29°52′53″N 98°14′24″W﻿ / ﻿29.88139°N 98.24000°W﻿ / 29.88139; -98.24000. Please note, this GPS coordinate does not correspond to a public access location (please see the section below on Public Access in the Recreation section). It is located in northern Comal County, Texas, on the northeastern fringe of the San Antonio-New Braunfels MSA. It is about 35 mi (56 km) northeast of Downtown San Antonio and 40 mi (64 km) southwest of Austin. Towns in the immediate vicinity of the lake include Canyon City, Cranes Mill, Hancock, Fischer, Sattler, and Startzville, all part of the census-designated place known as Canyon Lake, Texas. Larger towns nearby include New Braunfels and San Marcos.

Construction of Canyon Dam began in 1958 to provide both flood control and water conservation. Impoundment of the lake began in 1964, and the lake was filled to its conservation level in 1968.

The Guadalupe-Blanco River Authority (GBRA) has rights to the water in the conservation pool of the lake. This water is used to operate several small hydroelectric plants downstream from New Braunfels, and for municipal water supply, irrigation, and industrial uses. GBRA built a hydroelectric facility at Canyon Dam in August 1987; it was put into service in February 1989. 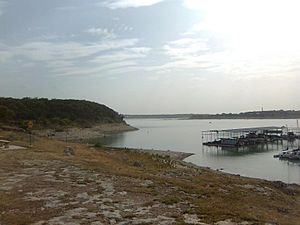 A view of Canyon Lake

Canyon Lake is a center for recreation in the area. The Corps of Engineers built and maintains eight park areas around the lake for camping, swimming, boating and picnicking. Bank fishing is available in all park areas, and a fishing dock can be found in Cranes Mill Park on the south side of the lake. Comal County provides several public boat ramps for access to the lake. Hike, bike and equestrian trails are available, as is limited hunting (archery only) and professional fishing guide services.

The GPS coordinates given for a general search of 'Canyon Lake, Texas' on Wikipedia or available from a 'Google' search do not correspond to any public access areas. The only public access to the lake is at one of the parks, marinas or boat ramps around the lake. Although the Army Corps of Engineers owns and controls the shore immediately above the lake waterfront, the remainder of the lake shore (accessible by public roads) is privately owned property and public access to the lake shore through any of these properties is not allowed.

There are several public parks on the shores of Canyon Lake that allow access to the lake for swimming, fishing and boating.

There are 2 marinas located on the lake. The marinas have boats and jet skis available for rent.

Plans by GBRA to sell water from Canyon Lake to supply the fast-growing San Antonio and Austin regions have raised concerns that the lake will fall well below the established conservation pool level, potentially causing problems ranging from erosion and weakening of Canyon Dam to a decline in property values and possible health issues from the exposure of long-submerged land. This has led to several administrative actions and lawsuits over the future of Canyon Lake.

All content from Kiddle encyclopedia articles (including the article images and facts) can be freely used under Attribution-ShareAlike license, unless stated otherwise. Cite this article:
Canyon Lake (Texas) Facts for Kids. Kiddle Encyclopedia.