Canyon Ferry Dam is a concrete gravity dam in a narrow valley of the Missouri River, United States, where the Big Belt Mountains and the Spokane Hills merge, approximately 68 miles (109 km) downstream from the confluence of the Gallatin, Madison, and Jefferson rivers, and about 20 miles (32 km) east of the city of Helena, Montana. The dam is for flood control, irrigation, recreation and hydroelectric power. The building of the dam created a reservoir known as Canyon Ferry Lake. 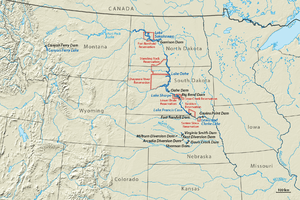 Canyon Ferry and other dams built in the Pick–Sloan Program

In 1941, the first study for the dam was carried out by the Bureau of Reclamation, the Montana Water Board and Montana Power Company. The dam and power plant were part of the Pick-Sloan Plan and approved by the Flood Control Act of 1944 which was signed on December 22. Known as the Canyon Ferry Unit, construction began on May 24, 1949, and was completed on June 23, 1954. On December 18, 1953, the power plant's first generator became operational and the other two went online in 1954.

Dam from lake side

All content from Kiddle encyclopedia articles (including the article images and facts) can be freely used under Attribution-ShareAlike license, unless stated otherwise. Cite this article:
Canyon Ferry Dam Facts for Kids. Kiddle Encyclopedia.