The canyon towhee (Melozone fusca) is a bird of the family Passerellidae.

The taxonomy of the group of towhees to which this species belongs is debated. At the higher level, some authors place the towhees in the family Fringillidae. Within the genus, there has been dispute about whether the canyon towhee is a distinct species from the California towhee (Melozone crissalis) found in coastal regions from Oregon and California in the United States through Baja California in Mexico. At present, molecular genetics seems to have settled this issue in favour of separation of the species. 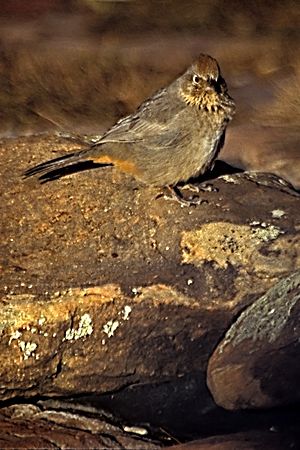 The towhee is native to lower-lying areas from Arizona, southern Colorado, New Mexico and western Texas south to northwestern Oaxaca, Mexico, mostly avoiding the coasts. Its natural habitat is brush or chaparral.

The towhee feeds on the ground or in low scrub rather than in the tree canopy. Near human habitation, it is often seen in parking lots, where it feeds on insects on the cars' grilles and takes cover under the cars when disturbed.

All content from Kiddle encyclopedia articles (including the article images and facts) can be freely used under Attribution-ShareAlike license, unless stated otherwise. Cite this article:
Canyon towhee Facts for Kids. Kiddle Encyclopedia.