The Cap-des-Rosiers Lighthouse is the tallest lighthouse in Canada, standing 34.1 metres (112 ft) tall. It is situated on the south shore of the Saint Lawrence River at the top of a steep cliff. It is located at the mouth of the river, where it flows into the Gulf of St. Lawrence. It is open for tours in the summer season. 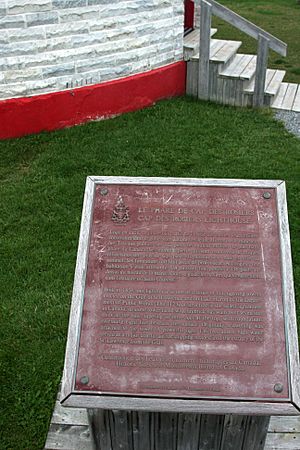 Historic Sites and Monuments Board of Canada

The Historic Sites and Monuments Board of Canada installed a plaque at the base of the lighthouse in 1977, with inscriptions in French and English, which reads (in English):

Built in 1858, this lighthouse is one of a series of tall, tapering towers erected on the Gulf of St. Lawrence and on Lake Huron by the Department of Public Works. The 112 foot structure is the tallest lighthouse in Canada; its stone tower faced with firebrick has walls over seven feet thick at the base, tapering to three feet at the top, with foundations extending to eight feet beneath the surface. Originally a dwelling was attached to the tower. A powerful light 136 feet above high water served as a major coastal aid for shipping headed int the estuary of the St. Lawrence from the Gulf.

All content from Kiddle encyclopedia articles (including the article images and facts) can be freely used under Attribution-ShareAlike license, unless stated otherwise. Cite this article:
Cap-des-Rosiers Lighthouse Facts for Kids. Kiddle Encyclopedia.