Cape Newenham AFS was a continental defence radar station constructed to provide the United States Air Force early warning of an attack by the Soviet Union on Alaska.

The site became operational in April 1954, two years behind schedule. Cape Newenham was initially maintained by Detachment F-5, 531st Aircraft Control and Warning Group (AC&W Gp). In 1952, Alaskan Air Command (AAC) decided to upgrade the detachments to squadrons. The 794th Aircraft Control and Warning Squadron (AC&W Sq) was activated on 8 December 1952 with 107 military personnel authorized. However, due to delays in construction, the squadron operated at limited manning until the site became operational.

The station 58°38′12″N 162°03′42″W﻿ / ﻿58.63667°N 162.06167°W﻿ / 58.63667; -162.06167﻿ (Cape Newenham Station) had its main camp in a valley between peaks. Recreational features included hobby shops and recreation rooms, plus opportunities for such sports as skiing, skating, horseshoes, and basketball. The buildings were connected by enclosed portals so no one needed to go outside in winter unless absolutely necessary. Tours at the station were limited to one year because of the psychological strain and physical hardships. Mail was usually delivered twice a week. The station had a tramway connecting the base station with the radar antennas located on a mountain peak at 2,300 feet. The tramway cables were constantly breaking because of high winds and ice, and fog and the extreme cold made repairs hazardous. Ice 16 inches thick built up on the cables in winter. A new riblet type tramway was installed in 1962.

Cape Newenham AFS was originally equipped with an AN/FPS-3 Search Radar which was later modified as the AN/FPS-93A Search Radar. The station provided information 24/7 to the air defense Direction Center at King Salmon AFS where it was analyzed to determine range, direction altitude speed and whether or not aircraft were friendly or hostile. An AN/FYQ-9 Semiautomatic Data Processing and Display System was installed and became operational in July 1965, eliminating the need to pass track data manually.

The squadron was assigned to various headquarters, including AAC. On 15 October 1977, the squadron was reassigned from Headquarters, AAC to the 531st AC&W Gp upon the reactivation of the latter. The Group was redesignated the 11th Tactical Control Group on 1 July 1981.

Communications were initially provided by a high frequency radio system which proved unreliable because of atmospheric disturbances. The Alaskan Air Command, after investigating various options, decided to build the White Alice Communications System, a system of Air Force-owned tropospheric scatter and microwave radio relay sites operated by the Air Force Communications Service (AFCS). The Cape Newenham site 58°39′00″N 162°02′08″W﻿ / ﻿58.65000°N 162.03556°W﻿ / 58.65000; -162.03556﻿ (Cape Newenham White Alice) was activated in December 1957. It was inactivated in March 1979, and replaced by an Alascom owned and operated satellite earth terminal as part of an Air Force plan to divest itself of the obsolete White Alice Communications System and transfer the responsibility to a commercial firm.

Construction of a composite building was begun in late 1975. The $11.7 million facility was accepted by the Alaska District Corps of Engineers in October 1980. However, occupancy was delayed until July 1981 because of safety deficiencies and changes in design.

On 1 October 1977, AAC, after a trial period, implemented a site support contract with RCA Services as part of an Air Force-wide effort to reduce remote tours. Eighty military positions were deleted. The remaining 14 were primarily in operations. Over the years, the equipment at the station was upgraded or modified to improve the efficiency and accuracy of the information gathered by the radars. In 1983, Cape Newenham received a new AN/FPS-117 minimally attended radar under Alaskan Air Command's SEEK IGLOO program. It was designed to transmit aircraft tracking data via satellite to the Alaskan NORAD Regional Operations Control Center (ROCC) at Elmendorf AFB.

No longer needed, the 794th AC&W Sq was inactivated on 1 November 1983 and the station redesignated as a Long Range Radar (LRR) Site. This left only contractor personnel to maintain the site radar. The composite building was modified to house personnel and equipment, and the other facilities were disposed of. In 1990, jurisdiction of the Cape Newenham LRR Site was transferred to Eleventh Air Force with the re-designation of AAC.

In 1998 Pacific Air Forces initiated "Operation Clean Sweep", in which abandoned Cold War stations in Alaska were remediated and the land restored to its previous state. After years of neglect the facilities at the station had lost any value they had when the site was closed. The site remediation of the radar, support and White Alice communication station was carried out by the 611th Civil Engineering Squadron at Elmendorf AFB, and remediation work was completed by 2005.

Cape Newenham has the typical subarctic climate of most of Alaska, though owing to the maritime influence of the Bering Sea it borders on a polar climate despite receiving an amount of precipitation one would expect more of an oceanic location. 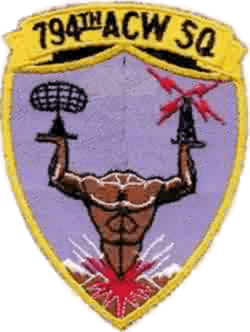 Emblem of the 794th Aircraft Control and Warning Squadron

All content from Kiddle encyclopedia articles (including the article images and facts) can be freely used under Attribution-ShareAlike license, unless stated otherwise. Cite this article:
Cape Newenham Air Force Station Facts for Kids. Kiddle Encyclopedia.