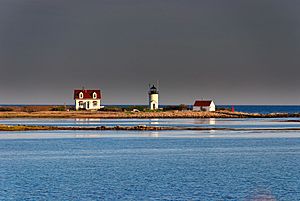 Cape Porpoise, Maine is a small coastal village in the town of Kennebunkport, Maine, United States, and was the original English settlement of the town. It is northeast of Dock Square and southwest of Goose Rocks Beach. The village occupies the mainland adjacent to Cape Porpoise Harbor. More than a dozen islands protect the deep natural harbor.

Cape Porpoise was named by explorer Captain John Smith in 1614 during his exploration of New England. English settlers arrived during the 1620s at Cape Porpoise Harbor. The town was first incorporated as "Cape Porpus" under the government of the Massachusetts Bay Colony in 1653. During King William's War in 1689, Indians forced the settlers off the mainland and onto Stage Island until rescued by the English. The town was resettled by 1720.

During Dummer's War, in an October raid at Mount Desert, one Capt. Cogswell and his crew were surprised and taken as they were stepping ashore; and about the same time, Smith and Bailey were killed at Cape Porpoise, one on Vaughan's Island, and the other on the seashore, not far from the site of the old meeting-house.

On August 8, 1782 the English 16 gun brig Meriam and the schooner Hammond entered the harbor and attempted to take a schooner and sloop as prizes. The English took the schooner but ran the sloop aground. The town militia had assembled and fired shore cannons and muskets at the English. The English burned the sloop and then returned to their brig but couldn't escape the harbor because of a growing southern breeze. Over the next few hours, the English towed and warped the brig out of the harbor under musket and cannon fire even as they tried to return gun fire. All combined, more than 20 men were killed during the battle, including Captain James Burnham, one of the town leaders, and the only American casualty.

In July 2010, singer Taylor Swift filmed the music video for her hit single "Mine" here. She filmed parts of the video in the popular Wayfarer restaurant, The Captain's restaurant, and in a local river.

The village is located on State Highway 9.

All content from Kiddle encyclopedia articles (including the article images and facts) can be freely used under Attribution-ShareAlike license, unless stated otherwise. Cite this article:
Cape Porpoise, Maine Facts for Kids. Kiddle Encyclopedia.