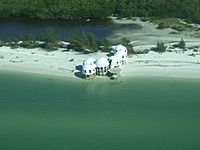 Cape Romano is a cape at the southern end of Caxambas Island, just south of Marco Island and northwest of the Ten Thousand Islands in Collier County, Florida.

Calusa Indians founded the settlement and called it Manataca. Juan Ponce de León briefly stopped at Manataca on his first trip from Puerto Rico to Florida, but the Indians tried to fight him off.

Cape Romano is where Hurricane Wilma made its first U.S. landfall in October 2005. In 2008, Tropical Storm Fay came ashore near the cape, as had the 1910 Cuba hurricane.

All content from Kiddle encyclopedia articles (including the article images and facts) can be freely used under Attribution-ShareAlike license, unless stated otherwise. Cite this article:
Cape Romano Facts for Kids. Kiddle Encyclopedia.