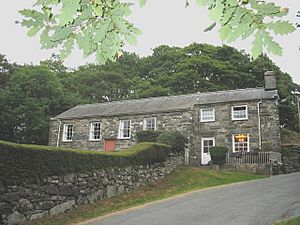 Capel Salem is a Grade II listed building in the hamlet of Pentre Gwynfryn, near Llanbedr, Gwynedd, Wales. This Baptist chapel building is located about a mile up river of Llanbedr, on a ridge between the two valleys. It is just 300 yards (270 m) upstream from where the two rivers meet. The building was begun in 1826 and completed in 1851 but ten years later, it was extended to include the chapel house and to remodel the interior. 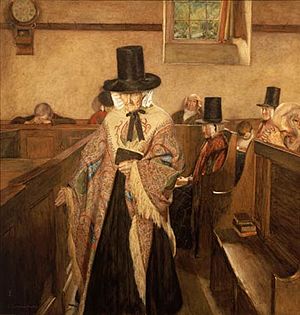 A picture painted in 1908 by Devonshire artist and architect, Sidney Curnow Vosper, (b. 29 October 1866) shows details of the internals of the chapel. The picture itself was purchased a year later by Lord Leverhulme of Lever Brothers fame in 1909. Leverhulme used it for the purposes of marketing Sunlight soap. For every 7 lbs of soap bought, the buyer qualified for a print of the Salem picture. As a result, it became one of the most widely distributed pictures in the UK.

Many people believe that the face of the devil may be seen in the shawl worn by Siân Owen. The original picture now hangs in the Lady Lever Art Gallery, Port Sunlight.

All content from Kiddle encyclopedia articles (including the article images and facts) can be freely used under Attribution-ShareAlike license, unless stated otherwise. Cite this article:
Capel Salem, Llanbedr Facts for Kids. Kiddle Encyclopedia.