Captain Star was a British/Canadian animated series starring the voice of Richard E. Grant as Captain Jim Star, based on a comic by Steven Appleby: Rockets Passing Overhead. Only 13 episodes of 30 minutes each were produced and aired from 1997 to 1998.

This is the story of Captain Star involves the crew of a rocketship called the Boiling Hell, who have been ordered to a dry planet known as "the Nameless Planet", at the Ragged Edge of the Universe, in order to wait for their next assignment. The ship's crew consists of the deeply egocentric and often paranoid Captain Star, the Dana Scully-esque Science Officer Scarlett, the nine-headed, six-armed mutant Engineer/Stoker "Limbs" Jones, and the fish-keeping milquetoast Navigator Black. They are later joined by a robot, Jim-Bob-Bob, who does laundry duty and several other acts of menial servitude.

Captain Star is introduced in the opening theme as "the greatest hero any world has ever known". A legendary explorer who has hundreds of planets named after him, Captain Star's birthday is a holiday throughout the entire universe. Throughout the program, the characters await further orders from Mission Control which never come, and they seem to have been waiting there so long that Navigator Black has constructed and founded a fish restaurant on the Nameless Planet, which he mainly uses as a giant aquarium. It is unclear whether Mission Control has simply forgotten about Star and his crew, but the implication is that they have put the aging Star out to graze while affording him the indignity of forcing him to retire, and kept him on active duty so that he can continue to be a hero to the public. Events occurring on and off the planet, however, frequently require Star's intervention. 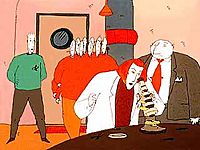 Captain Jim Star (Richard E. Grant) — Groomed from birth to be a starship captain, Captain Star is regarded as the greatest captain in the fleet. He left the Captain's Academy at age 12 to spend a year as a trainee under Captain Ned Nova of the Merry Cheeser, who had named 115 planets after himself, which was the record until Star surpassed him. Captain Star is roughly 127 "space years" old, which appears to make him a man in his 50s in his society. Not humble, though not excessively arrogant, Captain Star believes himself to be a hero and feels deserving of his pervading acclaim. He is often oblivious to danger and to the advice and concerns of his crew. Unquestioningly loyal, Star firmly believes that his orders will eventually come.

First Officer Scarlett (Denica Fairman) — A strong, brave, redheaded woman, and an accomplished scientist, Scarlett often saves the day through her scientific endeavours. Scarlett's logic and investigative mood are a stark contrast to Captain Star's tendency to improvise in an emergency. On The Nameless Planet, where Captain Star has no ship to command or adventures to lead, Scarlett handles most of his command duties.

Atomic Engine Stoker "Limbs" Jones (Adrian Edmondson) — Mutated in an atomic accident, "Limbs" Jones has nine heads and six arms. Each of Jones' heads accommodates a different part of his brain, causing each head to have a slightly different personality. Jones is a good cat lover, having sequentially named pet cats Sputnik 1 through 374. Conversations between Jones' many heads and other members of the crew often lead them to become impatient and annoyed with him.

Navigator Black (Kerry Shale/Gary Martin) — Once the navigator of the Boiling Hell, Navigator Black sets up a small fish-shaped restaurant on The Nameless Planet and becomes the cook. Obsessed with fish, the restaurant is filled with aquariums. Black often swims with his fish, and even creates a brain-computer interface device that depicts their thoughts. Black has a nervous temperament and often panics under pressure. A running gag in the show is Navigator Black's inability to tell his left from his right.

At least one VHS release of Captain Star is known to exist, containing the first three episodes of the series.

All content from Kiddle encyclopedia articles (including the article images and facts) can be freely used under Attribution-ShareAlike license, unless stated otherwise. Cite this article:
Captain Star Facts for Kids. Kiddle Encyclopedia.