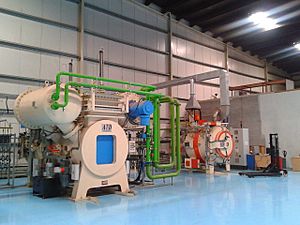 Carburization (often also called carburizing) is the process by which carbon is introduced into a metal.

One does it to make the surface harder and more abrasion resistant. But because too great a concentration of carbon makes metal brittle and unworkable, metals are also often decarburized. Depending on the amount of time and temperature, the affected area can vary in carbon content. In earlier times, one used a direct application of charcoal packed onto the metal for carburization, but modern techniques use carbon-bearing gases or plasma's (such as carbon dioxide or methane). Carburization is mainly used to harden the surface of low alloy steel.

All content from Kiddle encyclopedia articles (including the article images and facts) can be freely used under Attribution-ShareAlike license, unless stated otherwise. Cite this article:
Carburization Facts for Kids. Kiddle Encyclopedia.