The Cardigan Welsh Corgi is one of two separate dog breeds known as Welsh Corgis that originated in Wales; the other is the Pembroke Welsh Corgi. It is one of the oldest breeds of the British Isles.

Cardigan Welsh Corgis are known to be an extremely loyal dog breed. They are also versatile and can live in a variety of settings. They benefit from regular physical and mental stimulation.

Pembroke and Cardigan Welsh Corgis were originally listed as one breed by The Kennel Club in Britain in 1925, but were declared separate breeds in 1935. The Corgi Club was founded in December 1925 in Carmarthen in South Wales. It is reported that the local members favored the Pembroke breed, so a club for Cardigan enthusiasts was founded a year later (1926). Both groups have worked hard to ensure the appearance and type of breed are standardized through careful selective breeding. Pembrokes and Cardigans were officially recognized by the Kennel Club in 1928 and were lumped together under the heading Welsh Corgis. In 1934, the two breeds were recognized individually and shown separately.

One theory is that both breeds of the corgis descended from a line of northern spitz-type dogs. Another is that they descended from the Teckel family of dogs, which also produced Dachshunds.

The Cardigan is a long, low dog with upright ears and a fox brush tail.

Originally used only as a farm guardian, they eventually took on the traits of a cattle drover, herder, and many more. They are still highly valued for their herding, working, and guarding skills, as well as their companionship. The old American Kennel Club standard called it an "Alsatian on short legs". The Cardigan's tail is long (unlike the Pembroke Welsh Corgi, whose tail may be long, naturally bobbed or docked). 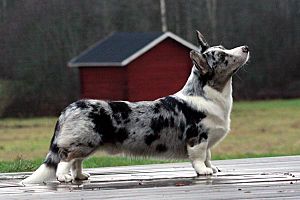 Cardigans, which are double coated, come in a variety of colors including any shade of red, sable, or brindle, as well as black, with or without tan, brindle or blue merle, with or without tan or brindle points. Other unofficial colors can occur, such as red merle, but these colors are not considered acceptable per the Cardigan standard. They usually have white on the neck, chest, legs, muzzle, underneath, tip of the tail and as a blaze on the head, known as the "Irish pattern." Other markings include ticking on the legs and muzzle, smutty muzzles and monk's hoods, especially on sables (a pattern of darker tipped hairs over a basic red coat color.). An average Cardigan is around 10 to 13 inches (250 to 330 mm) tall at the withers and weighs from 30 to 38 pounds (14 to 17 kg) for the male and 25 to 34 pounds (11 to 15 kg) for the female.

Canine Intervertebral Disc Disease (IVDD) is known to occur in the Cardigan Welsh Corgi. This is likely due to the Cardigan being a dwarf (chondrodysplastic) breed, and these breeds frequently suffer from Type I disk disease. This disease is commonly found in the Dachshund breed.

All content from Kiddle encyclopedia articles (including the article images and facts) can be freely used under Attribution-ShareAlike license, unless stated otherwise. Cite this article:
Cardigan Welsh Corgi Facts for Kids. Kiddle Encyclopedia.