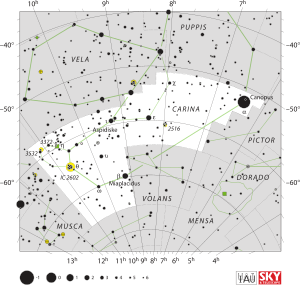 The star named Canopus is in Carina. Canopus is the second brightest star in the night sky. The Carina Nebula is also in Carina. It is very large emission nebula. It is a region where stars form.

All content from Kiddle encyclopedia articles (including the article images and facts) can be freely used under Attribution-ShareAlike license, unless stated otherwise. Cite this article:
Carina (constellation) Facts for Kids. Kiddle Encyclopedia.