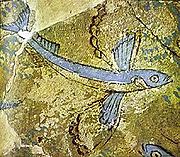 Painting of a flying fish

The constellation Volans is a group of stars in the southern sky. It is in the shape of a flying fish. The name Volans is a shortened from of its original, Piscis Volans. Volans was one of twelve constellations created by Petrus Plancius. He made these constellations from observations by Pieter Dirkszoon Keyser and Frederick de Houtman. Volans first appeared on a 35-cm diameter celestial globe published in 1597 (or 1598) in Amsterdam by Plancius with Jodocus Hondius. The first image of this constellation in a celestial atlas was in Johann Bayer's Uranometria of 1603.

All content from Kiddle encyclopedia articles (including the article images and facts) can be freely used under Attribution-ShareAlike license, unless stated otherwise. Cite this article:
Volans Facts for Kids. Kiddle Encyclopedia.