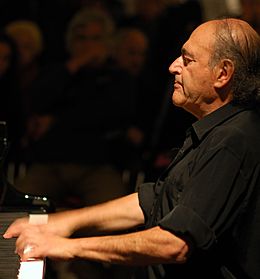 Carles Santos (1 July 1940 – 4 December 2017) was a Spanish artist. He began his career as a pianist and later worked in many other creative areas, including musical composition, filmmaking, screenwriting, acting, scenic musical shows, graphics, montage, sculpture, photography, poetry, and prose. He was born in Vinaròs, Valencian Community (Spain).

Santos was commissioned to compose works for a variety of special occasions, including the opening ceremonies of the 1992 Summer Olympic Games in Barcelona and the opening of the 2001 Biennial of Arts in Valencia.

All content from Kiddle encyclopedia articles (including the article images and facts) can be freely used under Attribution-ShareAlike license, unless stated otherwise. Cite this article:
Carles Santos Facts for Kids. Kiddle Encyclopedia.