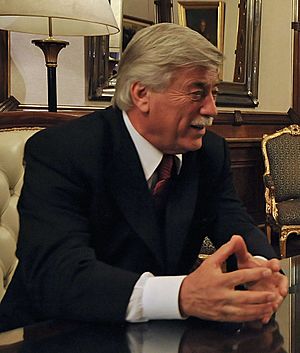 Carlos Soria (1 March 1949–1 January 2012) was an Argentine lawyer who became Governor of Rio Negro. A member of the ruling Peronist party, he had been the mayor of General Roca, until his election as governor of the province in October 2011. He died after being shot in the head during an argument at home with his wife.

All content from Kiddle encyclopedia articles (including the article images and facts) can be freely used under Attribution-ShareAlike license, unless stated otherwise. Cite this article:
Carlos Soria Facts for Kids. Kiddle Encyclopedia.