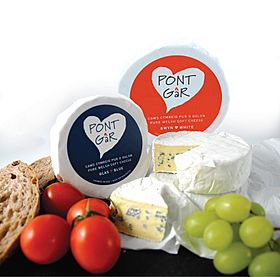 Carmarthenshire Cheese Company Ltd (Welsh: Cwmni Caws Caerfyrddin Cyf) is a cheese company based in Llanllwch, Carmarthen. The company was founded in 2006 by co-owners Steve and Sian Elin Peace. Some of its main brands include Pont Gâr, Llangloffan, and Boksburg.

Since the launch in 2006, the cheese has been manufactured in a facility nestled in the heart of milk producing West Wales. In 2006 the company acquired the Llangloffan cheese brand on the retirement of Leon Downey. This original artisan brand had been made since the 1970s in Pembrokeshire, and continues to be handmade to the same original recipe today. The company also produces a range of softer, mould ripened, speciality cheeses such as Pont Gâr and Boksburg which are sold in supermarkets, speciality distributors and wholesalers throughout Wales and the United Kingdom. In June 2018, it was announced that the Carmarthenshire Cheese Company went into liquidation.

Pont Gâr
Pont Gâr cheese is produced using traditional techniques and is matured in special ripening conditions for up to one month before sale. The soft mould ripened cheese has a distinct smooth, creamy flavour, developing a more pronounced flavour and savoury notes with age. Pont Gâr is available in delicatessens, specialist shops and some major UK supermarkets. The full product range includes Blue, White, Smoked and Garlic & Herb varieties.

Llangloffan
Llangloffan is the original artisan farmhouse cheese from Wales and was designed by Leon Downey in the 1970s on his farm and cheese centre near St Davids, Pembrokeshire. Leon retired in 2006 and Carmarthenshire Cheese acquired the business. The farmhouse style cheese is firm, yet smooth in texture and has a naturally developed rind. Llangloffan is available in White, Red, Garlic & Chive and Smoked varieties.

All content from Kiddle encyclopedia articles (including the article images and facts) can be freely used under Attribution-ShareAlike license, unless stated otherwise. Cite this article:
Carmarthenshire Cheese Company Facts for Kids. Kiddle Encyclopedia.