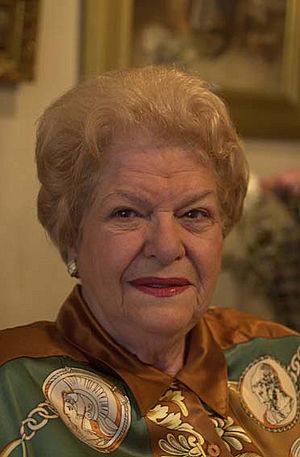 Carmen Montejo (María Teresa Sánchez González; May 26, 1925 – February 25, 2013) was an Cuban-Mexican actress. She was known for her many television shows. She was one of the last surviving actresses of the Golden Age of Cinema of Mexico.

Montejo was born on May 26, 1925 in Pinar del Río, Cuba. She was married to Manuel González Ortega until his death. Montejo died on February 25, 2013 in Mexico City, Mexico from an illness, aged 87.

All content from Kiddle encyclopedia articles (including the article images and facts) can be freely used under Attribution-ShareAlike license, unless stated otherwise. Cite this article:
Carmen Montejo Facts for Kids. Kiddle Encyclopedia.