The Carnamah Historical Society collects, records, preserves and promotes the history of Carnamah, a town and farming community in the Mid West region of Western Australia.

The society was formed in 1983, began a museum in 1992 and established itself online in 2003. It was subsequently profiled at the joint national conference of Museums Australia and Interpretation Australia in Perth in 2011. Its online content also resulted in Carnamah being featured at the National Museum of Australia in Canberra.

The society is an institutional member of Museums Australia, an affiliate of the Royal Western Australian Historical Society (RWAHS) and was the first Australian listing with the Society for One-Place Studies. At the RWAHS State History Conference in 2010 it was the recipient of the inaugural Affiliated Societies Merit Award for being a "dynamic, but very different society".

The society was the 2015 winner for contribution by a community-based organisation in the Western Australian Heritage Awards, which are conducted annually by the Heritage Council of Western Australia. The award citation attributed the society with using "cutting-edge technology to engage with and promote the heritage of, not only their own and neighbouring districts, but also the State". 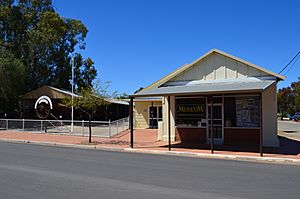 In 1992 the society established the Carnamah Museum near the centre of the Carnamah townsite. The museum contains a diverse collection of objects, tools, machinery, photographs and ephemera relating to Carnamah’s social, domestic, commercial and agricultural past.

In 2010 the society received a grant of $171,500 from Lotterywest to finance the extension of its museum. Additional financial and in-kind contributions were received from various sources including the Royalties for Regions Regional Grants Scheme and the Shire of Carnamah. The extension included the installation of a "Window to the Past" where an enlarged historic photograph of Carnamah's main street was fitted into an old window cavity (creating the illusion of looking through the window and into the past). The extended museum was officially opened on 15 September 2012 by Grant Woodhams, M.L.A. for Moore.

The society also cares for the Macpherson Homestead, located about one kilometre east of the Carnamah townsite. The stone homestead was built in the late 1860s and following deterioration was restored with locally raised funds and grants from Lotterywest. The homestead is permanently on the State Register of Heritage Places. The Heritage Council of Western Australia noted that "early settlers played an important and successful role in the development and growth of the Carnamah district" and that "the place has particular structural interest, with its high walls and steeply pitched roof and bush rafters".

The society began a website in 2003 and meets many of its organisational objectives online. While its museum collection relates primarily to the Carnamah district, the society has taken a more regional approach online which has been attributed with putting Carnamah into better historical context.

Online content includes an expansive biographical dictionary, virtual museum, historical photographs, cemetery records, local histories and Australian Curriculum resources. On the recommendation of the State Library of Western Australia the society's website has been periodically archived for posterity since 2004 under the Preserving and Accessing Networked Documentary Resources of Australia (PANDORA) program.

The rationale behind this model is to tell the history of the district "one person at a time".

The society added a virtual museum to its website in August 2011 to share its collection with a broader audience. It began with three virtual exhibitions, but was later expanded to a total of nine with support from the Department of Culture and the Arts (DCA). An image from Carnamah's virtual museum was the cover of the July–August 2013 edition of Inside History magazine. In 2013 the society began rolling out Australian Curriculum resources to accompany its virtual exhibitions with backing from the Western Australian History Foundation and DCA.

In May 2014 the society's Virtual Museum: to be known and distinguished as Carnamah was the Level 1 winner of the Permanent Exhibition category at the Museums and Galleries National Awards (MAGNA), which are conducted annually by Museums Australia. The MAGNA judges summarised the work as an innovative solution that was "very creative with excellent production values and interpretative images and narratives". The following year, in 2015, the accompanying education resources received a Highly Commended in the Level 1 Interpretation, Learning and Audience Engagement category of the same awards. The judges commented that they were "beautifully designed and comprehensive" and were "an exemplar for all local historical society/museums".

To commemorate the centenary of the Gallipoli landings, the society created an additional virtual exhibition on the First World War in 2015.

In May 2012 the society launched a virtual volunteering pilot to index electoral rolls, with the work contributing to its databases. "The aims of the program are to increase the output of the society, improve social inclusion and provide additional volunteering opportunities." In January 2013 the society received a $100,000 social innovation grant from the Government of Western Australia for the further development of its program. The funding, over a two-year period, covered research, development, trials, refinement and the sharing of structure and outcomes with other community sector organisations.

The society received a Highly Commended for Virtual Volunteering in the Innovation category of the 2015 Museums and Galleries National Awards. It was hailed as a "great socially inclusive project which addresses the needs of both the museum and the volunteer".

Carnamah at the National Museum of Australia

One of the notable derivatives from the society's work is Carnamah's inclusion in the permanent exhibition Landmarks: People and Places across Australia at the National Museum of Australia (NMA) in Canberra. A curator at the NMA wanted to include Carnamah after discovering the society's website from an internet search on soldier settlement. Within one of the ten themes, Extending the Farmlands, is Carnamah's First World War soldier settlement. The section, with accompanying objects, includes the stories of five soldier settlers and their families with interpretative detail being largely sourced from the Carnamah-Winchester Database on the society's website. In 2013 the NMA published a book on the exhibition, titled Landmarks: A History of Australia in 33 Places, with Carnamah being featured as one of the 33.

All content from Kiddle encyclopedia articles (including the article images and facts) can be freely used under Attribution-ShareAlike license, unless stated otherwise. Cite this article:
Carnamah Historical Society Facts for Kids. Kiddle Encyclopedia.