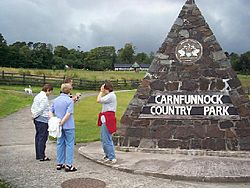 Carnfunnock Country Park is a 191-hectare park located between Drains Bay and Ballygally, near Larne, County Antrim, Northern Ireland. It is situated on the A2 Antrim Coast Road, 3.5 miles north of Larne. The park consists of mixed woodland, colourful gardens, walking trails and spectacular coastline with panoramic views of the Antrim Coast and North Channel. and is owned and run by Mid and East Antrim Borough Council.

The walled garden with its unique sundials and wooden sculptures is open all year round along with a maritime themed outdoor adventure playground, golf driving range and academy, way-marked walks, orienteering course, geocaching, wildlife garden, public toilets and picnic sites. The Cafe also operates at weekends throughout the year and there is a Parkrun every Saturday morning (subject to ground conditions). 1st Carnfunnock Scouts, which belongs to The Scout Association, was formed in October 2015 and meets regularly throughout the year.

From March / April to October there are attractions to suit all ages: a maze in the shape of Northern Ireland, a family fun zone with miniature railway, bouncy castle, bungee run, remote control boats / trucks, WOW balls, bungee trampolines and 18 hole mini golf course; a children's activity centre with snack stop, face painting / glitter tattoos and outdoor games including putting and table tennis; a touring caravan park and camp site; 9 hole golf course; barbecue areas and a modern visitor centre with gift shop. Have a go archery is also available at weekends from Easter to September. The park also offers a fun packed programme of events running from Easter to October, including band concerts within the Walled Garden amphitheatre, every Sunday during June, July and August.

In 2010 the park was approved as a venue for civil marriage ceremonies and the first exchange of vows took place in August 2010.

In 2014, Outdoor Recreation NI produced a report called 'Options to enhance access with the creation of a natural heritage trail between Ballygally Village and Carnfunnock Country Park' highlighting the parks close links to Ballygally.

The maze is based on the winning idea from a 1985 Design a Maze competition: a hedge maze in the shape of Northern Ireland. It has numerous paths and dead ends with seven central spaces, one for each county and one for Lough Neagh. The maze was planted out in 1986 with over 1,500 mature hornbeam (Carpinus Betulus). By 1991 it was well established for its official opening marking Northern Ireland's contribution to the International Year of the Maze.

All content from Kiddle encyclopedia articles (including the article images and facts) can be freely used under Attribution-ShareAlike license, unless stated otherwise. Cite this article:
Carnfunnock Country Park Facts for Kids. Kiddle Encyclopedia.