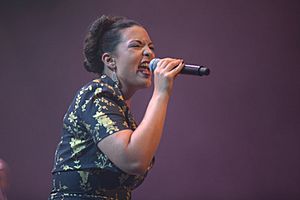 Caroline Esmeralda van der Leeuw (born 26 April 1981), best known by her stage name of Caro Emerald, is a Dutch pop and jazz singer. She released her first song "Back It Up" on 6 July 2009. Her single "A Night Like This" in 2009 reached the number 1 position in the Netherlands.

Her second and latest album, The Shocking Miss Emerald, reached the #1 peak in the UK and the Netherlands.

All content from Kiddle encyclopedia articles (including the article images and facts) can be freely used under Attribution-ShareAlike license, unless stated otherwise. Cite this article:
Caro Emerald Facts for Kids. Kiddle Encyclopedia.