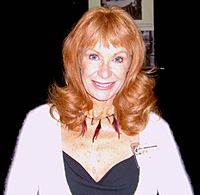 Carol Cleveland (born 13 January 1942) is an English-American actress, singer and comedian. She is known for her work with Monty Python. Cleveland was born in London. She retired in 2014. She first appeared in Monty Python's Flying Circus. She appeared in 30 of the 45 episodes in the series, plus all four Monty Python movies.

All content from Kiddle encyclopedia articles (including the article images and facts) can be freely used under Attribution-ShareAlike license, unless stated otherwise. Cite this article:
Carol Cleveland Facts for Kids. Kiddle Encyclopedia.