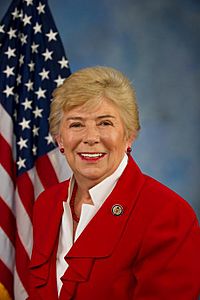 Carolyn McCarthy (née Cook; born January 5, 1944) is an American nurse and politician. She is a Democrat. She served as a member of the U.S. House of Representative for NY's 4th congressional district from 1997 to 2015. She is known for her being an advocate for gun control. Her husband was killed and their son was injured in the 1993 Long Island Rail Road shooting. She was played by actress Laurie Metcalf in the movie The Long Island Incident (1998), based on the events of the shooting.

McCarthy was born in Brooklyn, New York City and grew up in Mineola, New York. She was married to Dennis McCarthy from 1967 until his murder in 1993. In 2013, it was reported she had been diagnosed with lung cancer.

All content from Kiddle encyclopedia articles (including the article images and facts) can be freely used under Attribution-ShareAlike license, unless stated otherwise. Cite this article:
Carolyn McCarthy Facts for Kids. Kiddle Encyclopedia.