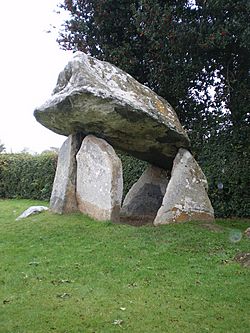 Carreg Coetan Arthur is a neolithic dolmen near Newport in North Pembrokeshire, Wales.

Carreg Coetan Arthur dates from around 3000 BC and is the remains of a Neolithic burial chamber (also known as a quoit).

The remains consist of a 4-metre-long capstone on smaller supporting rocks. It would have originally been earth covered, but this has eroded away.

The site is managed by Cadw and it is a scheduled ancient monument.

All content from Kiddle encyclopedia articles (including the article images and facts) can be freely used under Attribution-ShareAlike license, unless stated otherwise. Cite this article:
Carreg Coetan Arthur Facts for Kids. Kiddle Encyclopedia.