Newport (Welsh: Trefdraeth, meaning: "town by the beach") is a town, parish, community, electoral ward and ancient port of Parrog, on the Pembrokeshire coast in West Wales at the mouth of the River Nevern (Welsh: Afon Nyfer) in the Pembrokeshire Coast National Park.

A popular tourist destination, Newport town straddles the Fishguard to Cardigan (A487) road, while the old port area hosts beach, water and other activities.

The town was founded by the Norman William FitzMartin (c.1155-1209) in about 1197. He was a son-in-law of the Lord Rhys, who nevertheless expelled him from his former base at nearby Nevern, which had been established by his father Robert fitz Martin. William founded Newport as the new capital of the Marcher Lordship of Cemais and it was a busy port founded primarily on the growing medieval wool trade. Despite seizure from the native Welsh, it remained within the FitzMartin family until the death of William, the 2nd Lord Martin, who died without male heir in 1326.

Newport is a marcher borough. George Owen of Henllys, in 1603, described it as one of five Pembrokeshire boroughs overseen by a portreeve. It retains some of the borough customs such as electing a mayor, who beats the bounds on horseback every August. 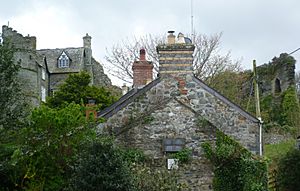 View of castle and attached house from foot of Castle Street

The castle built by FitzMartin is situated on a spur of Carn Ingli which overlooks Newport and much of the surrounding countryside. Though in ruins since at least the 17th century, it is impressive due to its site, and a converted house incorporating the castle walls which faces west over the town, the bay and the Irish Sea is still inhabited.

In the 1880s the castle was associated with John Brett, who rented it for his large family while he spent summers cruising the south and west coasts of Wales painting, sketching and photographing. He moored his 210-ton schooner, Viking (which had a crew of twelve) at Parrog. A lifeboat station (now a private residence) was operated from a beach known as The Cwm to the west of Parrog in the early 20th century.

Newport town has a compact but varied shopping centre with most facilities including bank, post office, a wide range of retail premises and ancient buildings including the castle, not presently (2014) open to the public, which is undergoing restoration work.

The old port area contains much of historic interest, including some of the old quay walls and two former lime kilns. As well as other activities there are moorings for small craft and a number of holiday lets and eating places. It is possible, with caution, to cross the river on foot at low tide. 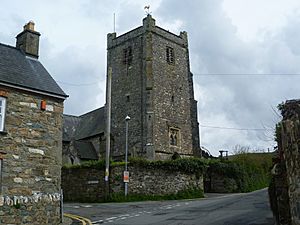 The tower of St Mary's Church

The church of St Mary's, situated below the castle though within the town, dates from the FitzMartin era, and the outside east apse bears their arms ("Argent, two bars gules"). The church was the subject of a 1860 photograph by notable early Welsh photographer John Thomas (1838–1905).

Other religious buildings include Bethlehem Chapel and the Tabernacle Chapel. 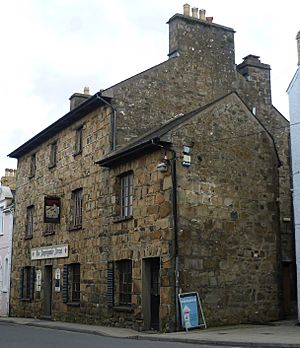 The town's hostelries include Llwyngwair Arms in the centre of town and Cnapan Hotel, a Georgian hotel and restaurant.

Newport Sailing Club is housed in an old warehouse. As well as facilities for members, it has a non-members' bar.

Newport is situated on the Pembrokeshire Coast Path, part of the Wales Coast Path, has a youth hostel and is popular for walks in the Preseli Hills. Carn Ingli hill, an Iron Age hillfort with Bronze Age hut circles, lies just outside the town. Nearby are the Carreg Coetan Arthur burial chamber and the West Wales Eco Centre.

A little to the north of Newport lie Newport Cliffs, a Site of Special Scientific Interest managed by Natural Resources Wales. 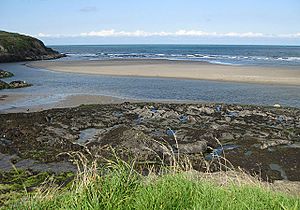 All content from Kiddle encyclopedia articles (including the article images and facts) can be freely used under Attribution-ShareAlike license, unless stated otherwise. Cite this article:
Newport, Pembrokeshire Facts for Kids. Kiddle Encyclopedia.