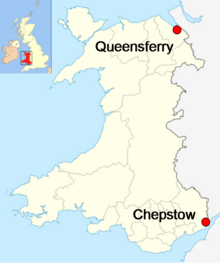 The coastline of Wales, showing start and end points of the trail. Inset: location of Wales within the United Kingdom 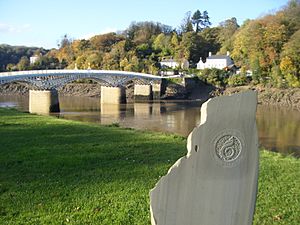 The stone at Chepstow marking the southern end of the Wales Coast Path, with the path's "dragon shell" logo

The Wales Coast Path (Welsh: Llwybr Arfordir Cymru) is a long-distance footpath which follows the whole coastline of Wales. It opened on 5 May 2012. It is 870-mile (1,400 km) long, from Chepstow in the south to Queensferry in the north.

Wales is the first country in the world to build a footpath along its entire coastline. The Path runs through eleven National Nature Reserves and other nature reserves, including those managed by The Wildlife Trusts or Royal Society for the Protection of Birds (RSPB). Lonely Planet rated the coast of Wales first in its Best in Travel: top 10 regions for 2012.

The Wales Coast Path was opened on 5 May 2012, as the world's first coastal path to cover an entire country. It follows the Welsh coastline from Chepstow in the south east to near Queensferry in the north. It joined together some existing paths, such as the North Wales Path, the Anglesey Coastal Path and the Llŷn Coastal Path. The Pembrokeshire Coast Path is a National Trail. and in 2011 was voted by National Geographic magazine as the second-best coastal destination in the world.

The 870 miles (1,400 km) long path goes through different coastal areas. These include the mouth of the River Dee, the seaside towns of north Wales, the Menai Strait, the Isle of Anglesey, the Llŷn Peninsula, Cardigan Bay, miles of sand in the National Park in Pembrokeshire, Gower, Cardiff Bay, Cardiff, and Chepstow.

The whole path can be used by walkers. Some sections can also be used by cyclists, families with pushchairs, people with restricted mobility, and horse riders.

The Countryside Council for Wales (now Natural Resources Wales) set up the path, and each of 15 local government areas it passes through look after their own section. There were already five coastal paths, in Pembrokeshire, Anglesey, Gwynedd, Ceredigion and the North Wales coast. These became five of the eight geographical areas that now make up the path. The other three areas are made up of single and combined counties and county boroughs with coastlines. 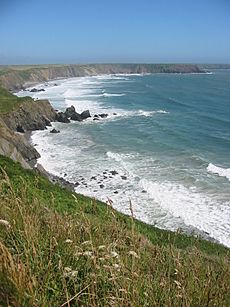 View from the Pembrokeshire Coast Path on Marloes peninsula.

The Wales Coast Path was set up by the Welsh Government with the former Countryside Council for Wales, sixteen local authorities and two National Parks. Since 2007 the Welsh Government has spent £2 million per year to improve public access to the coast through its Coastal Access Improvement Programme. The European Regional Development Fund has also given £3.9 million over three years to support the project.

The idea for the path was based on the success of the Pembrokeshire Coast Path National Trail and the Isle of Anglesey Coastal Path. Plans for the path were shown by First Minister Rhodri Morgan in June 2006, at the opening of the 125-mile path around Anglesey. It was thought the project would take up to five years; it has been nearer six. Visitors to the Pembrokeshire and Anglesey coastal paths bring a lot of money into Wales. It was also seen as an important to encourage both locals and visitors to discover and enjoy Wales’ outdoor spaces, also gain health and welfare benefits from walking.

The Countryside Council for Wales said that improvements to the path would continue during 2012 and 2013. The path will follow the coastline as close as it is safe and practical. The completed path is expected to lead to making shorter circular paths, linking to inland towns and villages.

The official opening of the 870 miles (1,400 km) path took place in a number of places on 5 May 2012. These places showed the path’s beauty and ease of access for walkers of all ages, fitness and ability. To celebrate the opening, Ramblers Cymru, hosted the Big Welsh Coastal Walk, with over 5,500 people taking part.

A complete walk around Wales

The 870 miles (1,400 km) of the Wales Coast Path joins the Offa's Dyke Path National Trail. This path follows the border with England, to make a 1,030 miles (1,660 km)walking path around almost the whole of Wales.

The Open Spaces Society is angry because some landowners will not allow the path to cross their land. This means 170 miles (270 km) – more than 20% of the route – will have to be on roads, sometimes out of sight of the sea. A Countryside Council for Wales spokeswoman said: “Just over 20% of the WCP is on road, slightly less than the average for national trails in Britain, which is in the region of 25%. This is mainly on quiet, country lanes.”

In 2014 there was a temporary road route north of Cardigan, connecting Gwbert with Mwnt. The Ceredigion Coast Path section in that area could not be used because of legal actions.

Walkers have a view overlooking a gypsy caravan site at Rover Way in Cardiff. People living here are worried about their privacy.

All content from Kiddle encyclopedia articles (including the article images and facts) can be freely used under Attribution-ShareAlike license, unless stated otherwise. Cite this article:
Wales Coast Path Facts for Kids. Kiddle Encyclopedia.