The Carrollton Viaduct, located over the Gwynns Falls stream near Carroll Park in southwest Baltimore, Maryland, is the first stone masonry bridge built for railroad use in the United States for the Baltimore and Ohio Railroad, founded 1827, with construction beginning the following year and completed 1829. The bridge is named in honor of Charles Carroll of Carrollton (1737-1832), of Maryland, known for being the last surviving signer of the Declaration of Independence, the only Roman Catholic in the Second Continental Congress (1775-1781), and wealthiest man in the Thirteen Colonies of the time of the American Revolutionary War (1775-1783). 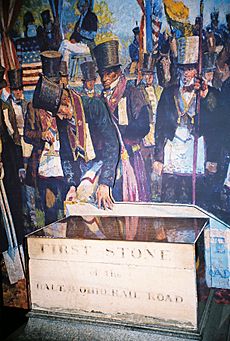 Laying of the cornerstone of the B&O.

The bridge is currently one of the world's oldest railroad bridges still in use for rail traffic, carrying loads far greater than originally envisioned. It was named after Charles Carroll of Carrollton (1737-1832), the last living signer of the Declaration of Independence and a director of the Baltimore and Ohio Railroad, who laid the cornerstone on July 4, 1828. As he laid the first stone he said, "I consider this among the most important acts of my life, second only to my signing the Declaration of Independence." Builder Caspar Wever and designer James Lloyd completed the structure for the railroad in November 1829, at an officially listed cost of $58,106.73. The actual cost of the construction may have been as high as $100,000.

The bridge, 312 feet (95 m) in length, rises from its foundations about 65 feet (20 m). It is 51 feet 9 inches (15.8 m) above Gwynns Falls. It consists of a full-centered arch with a clear span length of 80 feet (24 m) over the stream, and a space for two railroad tracks on its deck. To provide an underpass for a wagon road, an arched passageway, 16 feet (5 m) in width, was built through one of the masonry-walled approaches. Originally planned as one arch of 40 feet (12 m) chord, the dimensions were enlarged to quiet the concern of the proprietor of the mills located immediately above the bridge site, who feared that 40 feet would be insufficient if the stream was flooded. The heavy granite blocks which form the arches and exterior walls were procured from Ellicott's Mills and Port Deposit. A temporary wooden framework supporting the central span held 1,500 tons (1,360 tonnes) of this stone during construction. A white cornerstone at one end of the bridge bears the inscription "James Lloyd of Maryland, Builder A.D. 1829."

Andrew Jackson, the first President of the United States to ride on a railroad train, crossed the bridge on a trip between Ellicott's Mills and Baltimore on June 6, 1833. The Carrollton Viaduct has provided continual service to the Baltimore and Ohio Railroad and its modern corporate successor, CSX Transportation.

The viaduct was designated a National Historic Landmark on November 11, 1971 and was automatically listed on the National Register of Historic Places the same day.

All content from Kiddle encyclopedia articles (including the article images and facts) can be freely used under Attribution-ShareAlike license, unless stated otherwise. Cite this article:
Carrollton Viaduct Facts for Kids. Kiddle Encyclopedia.