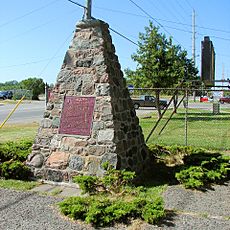 Carrying Place is a community that serves as the gateway to Prince Edward County, Ontario, Canada. Situated northwest of Picton and just south of Trenton, it was named for its location on the portage between the Bay of Quinte and Weller's Bay on Lake Ontario. The Loyalist Parkway passes through the community.

In 1787 the Gunshot Treaty was signed at Carrying Place.

Carrying Place was considered as a candidate to be the capital of Ontario.

Before the Murray Canal opened a passage for ships in 1889, travellers from Kingston to York knew the spot well. Before the arrival of Europeans, the local, indigenous people portaged the nine mile stretch and gave the place its name. Once a major stagecoach stop on the old Danforth Road (now Loyalist Parkway), Carrying Place is still a milestone for travellers as they cross the canal that made Prince Edward County into an island.

The name Quinte comes from the indigenous Kente, which survives as Fort Kente and the cities of Quinte and Quinte West .

All content from Kiddle encyclopedia articles (including the article images and facts) can be freely used under Attribution-ShareAlike license, unless stated otherwise. Cite this article:
Carrying Place, Ontario Facts for Kids. Kiddle Encyclopedia.