Bay of Quinte facts for kids 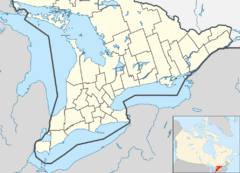 Indian Point of Cressy Point, easternmost point of Prince Edward County and entrance to the Bay of Quinte.

The Bay of Quinte is a long, narrow bay shaped like the letter "Z" on the northern shore of Lake Ontario in the province of Ontario, Canada. It is just west of the head of the Saint Lawrence River that drains the Great Lakes into the Gulf of Saint Lawrence. It is located about 200 kilometres (120 mi) east of Toronto and 350 kilometres (220 mi) west of Montreal.

The name "Quinte" is derived from "Kenté", which was the name of an early French Catholic mission located on the north shore of what is now Prince Edward County. Officially, in the Mohawk language, the community is called "Kenhtè:ke", which means "the place of the bay". The Cayuga name is Tayęda:ne:gęˀ or Detgayę:da:negęˀ, "land of two logs."

The Bay, as it is known locally, provides some of the best trophy walleye angling in North America as well as most sport fish common to the great lakes. The bay is subject to algal blooms in late summer. Zebra mussels as well as the other invasive species found in the Great Lakes are present.

The Quinte area played a vital role in bootlegging during Prohibition in the United States, with large volumes of liquor being produced in the area, and shipped via boat on the bay to Lake Ontario finally arriving in New York State where it was distributed. Illegal sales of liquor accounted for many fortunes in and around Belleville.

Tourism in the area is significant, especially in the summer months due to the Bay of Quinte and its fishing, local golf courses, provincial parks, and wineries. 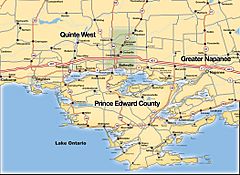 The northern side of the bay is defined by Ontario's mainland, while the southern side follows the shore of the Prince Edward County headland. Beginning in the east with the outlet to Lake Ontario, the bay runs west-southwest for 25 kilometres (16 mi) to Picton (although this section is also called Adolphus Reach), where it turns north-northwest for another 20 kilometres (12 mi) as far as Deseronto. From there it turns south-southwest again for another 40 kilometres (25 mi), running past Big Island on the south and Belleville on the north. The width of the bay rarely exceeds two kilometres (1.2 mi). The bay ends at Trenton (Quinte West) and the Trent River, both also on the north side. The Murray Canal has been cut through the "Carrying Place", the few kilometres separating the end of the bay and Lake Ontario on the west side. The Trent River is part of the Trent-Severn Waterway, a canal connecting Lake Ontario to Lake Simcoe and then Georgian Bay on Lake Huron.

There are several sub-bays off the Bay of Quinte, including Hay Bay, Big Bay, and Muscote Bay.

Quinte is also a region comprising several communities situated along the Bay of Quinte, including Belleville, which is the largest city in the Quinte Region, and represents a midpoint between Montreal, Ottawa, and Toronto.

Mohawks of the Bay of Quinte

The Mohawks of the Bay of Quinte (Kenhtè:ke Kanyen'kehá:ka) on traditional Tyendinaga Mohawk Territory. Their reserve Band number 244, their current land base, is 73 km2 (18,000 acres) on the Bay of Quinte in southeastern Ontario east of Belleville and immediately to the west of Deseronto.

The community takes its name from a variant spelling of Mohawk leader Joseph Brant's traditional Mohawk name, Thayendanegea (standardized spelling Thayentiné:ken), which means 'two pieces of fire wood beside each other'. Officially, in the Mohawk language, the community is called "Kenhtè:ke" (Tyendinaga), which means "on the bay", and was the birthplace of Tekanawí:ta. The Cayuga name is Tyendinaga, Tayęda:ne:gęˀ or Detgayę:da:negęˀ, "land of two logs."

The Quinte Region, specifically the City of Belleville, is home to Loyalist College of Applied Arts and Technology. Other post-secondary schools in the region include Maxwell College of Advanced Technology, CDI College, and Quinte Literacy. Secondary schools in the region include Albert College (private school) and Sir James Whitney (a school for the deaf and severely hearing-impaired).

All content from Kiddle encyclopedia articles (including the article images and facts) can be freely used under Attribution-ShareAlike license, unless stated otherwise. Cite this article:
Bay of Quinte Facts for Kids. Kiddle Encyclopedia.