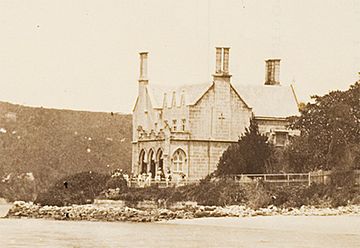 Carthona, Darling Point, circa 1870 before the 1880s extensions at the back were made

Carthona is a large Gothic Revival architecture style house situated on a promontory of Darling Point, Sydney, Australia. It is listed by the New South Wales Heritage Council as a building of historical significance and has a state heritage listing.

Carthona is described by the Heritage Council as an "impressive two storey mansion with cellars, of mannerist Tudor Gothic style. Built of sandstone, exterior there is a profusion of gabled slate roofs having castellated parapets and balconies dominated by tall tudor chimneys. Ground floor windows are pointed Gothic style having three centred heads and fretwork while first floor windows are flat arched and shuttered.". It was built in 1841 by Sir Thomas Mitchell and it is believed that many of the keystones of doors and windows were carved by him. Carthona has had many residents some of whom were historically interesting.

All content from Kiddle encyclopedia articles (including the article images and facts) can be freely used under Attribution-ShareAlike license, unless stated otherwise. Cite this article:
Carthona, Darling Point Facts for Kids. Kiddle Encyclopedia.