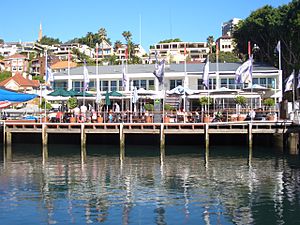 Darling Point is a harbourside eastern suburb of Sydney, Australia. It is 4 kilometres east of the Sydney central business district and is part of the local government area of Woollahra Council.

Darling Point is bounded by Sydney Harbour to the north, Double Bay to the east, Edgecliff to the south and Rushcutters Bay to the west. Darling Point, renowned for its desirable and expensive real estate, is mostly residential and regarded as one of the most exclusive and prestigious suburbs in Australia.

What is now the Darling Point area was originally known as Eurambi, Yarranabbi, Yarrandabbi and Yaranabe by the local Aboriginal people. It was named Darling Point in recognition of Elizabeth Darling, the wife of New South Wales Governor Ralph Darling.

During the Sydney 2000 Olympics, Darling Point hosted the sailing events.

The Darling Point Society endeavors to ensure that the voice of residents is heard. It has earned a respected opinion at council. It expects accountability and demands transparency. It aims to save what is lovely of what is left in one of the most densely populated, oldest and most historic areas of Sydney. http://darlingpointsociety.com.au/

Darling Point Road follows the ridge of the headland that is Darling Point. Mona Road and Greenoaks Avenue act as two other main access roads to the suburb. New Beach Road runs between the western boundary of the suburb and Rushcutters Bay Park. The 327 bus service used to go through Darling Point but it has been reduced to a lesser route, now called 328. Darling Point ferry wharf provides access to Double Bay ferry services. Darling Point is also serviced by the nearby Edgecliff railway station.

McKell Park was originally the site of the now-demolished Canonbury House, but is now a public park. Situated at the northern end of Darling Point Road, it has panoramic views of Sydney Harbour and is a popular location for picnics and weddings. It also provides access to Darling Point's ferry stop.

"The Drill Hall" forms part of the Sir David Martin Reserve and was previously part of the Royal Australian Navy base, HMAS Rushcutter. The Drill hall is one of the oldest-surviving Australian military buildings and was originally located on Bennelong Point, now the location of the Sydney Opera House.

Situated close to McKell Park, Craigend is a mansion constructed in the Moorish and Art Deco styles in 1935, including a pair of doors from an ancient mosque in Zanzibar and a traditional Japanese garden. In 1948, the property was acquired by the US government as the official residence of the Consul-General. It has since returned to the private sector. In 1975, it served as the shooting location for the villain's lair in the Hong Kong / Australian co-production The Man from Hong Kong. The house is heritage-listed.

Built in 1841 for the Surveyor-General Sir Thomas Mitchell, Carthona is a harborside sandstone mansion located at the end of Carthona Avenue. With its panoramic water views across Double Bay, to Point Piper, and north toward Manly, it is considered one of Sydney's most-valuable properties. It is currently held by descendants of Philip Bushell, the tea merchant, who died at the home in 1954. It is heritage-listed. 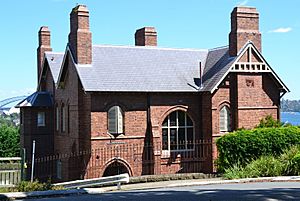 The following buildings are on the Register of the National Estate.

At the 2011 census, there were 3,919 residents in Darling Point. The most common ancestries in Darling Point were English (24.9%), Australian (16.1%), and Irish (8.9%). The median weekly household income in Darling Point was $2,511, slightly more than double the national median of $1,234. Darling Point is a suburb with high density housing, with 82.6% of dwellings being flats, units or apartments.

According to analysis of Australian Taxation Office return records by the Queensland University of Technology, Darling Point donates more money to charities than any other area in Australia.

All content from Kiddle encyclopedia articles (including the article images and facts) can be freely used under Attribution-ShareAlike license, unless stated otherwise. Cite this article:
Darling Point, New South Wales Facts for Kids. Kiddle Encyclopedia.