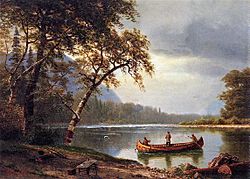 Salmon fishing on the Cascapédia River, by Albert Bierstadt, 2nd half 19th century.

The Cascapedia is known for its Atlantic salmon (salmo salar) fishing. With average catches of 20 pounds (9.1 kg) and a record catch of 54 pounds (24 kg), caught in 1886, the river has long been recognized as one of Quebec's richest salmon rivers. Already back in 1835, surveyor Joseph Hamel noted the abundance of fish, including trout, salmon, carp, and whitefish. Several Governors General of Canada, including The Marquess of Lansdowne and Lord Stanley, had summer homes along this river.

The river is accessible via Quebec Route 299 that follows the river's course for 69 kilometres (43 mi). Almost its entire course is protected in the Cascapedia River Wildlife Reserve (réserve faunique de la Rivière-Cascapédia), established in 1982. Its headwaters and Lake Cascapedia are within the Gaspésie National Park.

Its name comes from the Mi'kmaq word gesgapegiag, meaning "strong current" or "large river". It was first documented on a map by Jean-Baptiste-Louis Franquelin in 1686 as Kichkabeguiak, and appeared as Kaskabijack on a map of 1783. By 1863 Stanislas Drapeau used the current spelling.

The Cascapédia River is entirely undammed and wild, and no municipality is using it for its wastewater. Because its source is the Chic Choc Mountains that are largely made up of soluble limestone, its waters are rich in carbonates and low in sulfates and chlorides, with a higher conductivity and pH level than typical water of the Canadian Shield. The lack of agriculture and industry keep the river free from pollution. Its water is rated of the highest quality.

The Cascapedia basin is also mostly undeveloped with less than 500 hectares (1,200 acres) under cultivation. Logging is more important: 8 percent of the basin area was harvested between 1988 and 1994.

The significant tributaries of the Cascapédia River are (in upstream order):

All content from Kiddle encyclopedia articles (including the article images and facts) can be freely used under Attribution-ShareAlike license, unless stated otherwise. Cite this article:
Cascapédia River Facts for Kids. Kiddle Encyclopedia.