Casey Powell (born February 18, 1976) is a Hall of Fame American former college and professional lacrosse player from West Carthage, New York. In 1998, he graduated from Syracuse University, where he was a four-time USILA All-American. Powell was the NCAA Division I Most Outstanding Player in 1997 and 1998. Powell was inducted into the National Lacrosse Hall of Fame in 2017.

After retiring from professional lacrosse, Powell shifted focus to other business and philanthropic endeavors. Powell started the World Lacrosse Foundation, a non-profit organization for the advancement of lacrosse in 2015. He is a founder of Speed Lacrosse, a modified version of the sport.

His two younger brothers, Ryan and Mikey, were also lacrosse stars at Syracuse, where they all wore jersey number 22.

Powell was a three-time first-team All-American attackman and midfielder, and helped Syracuse win the 1995 NCAA National Championship. Powell is the only player in NCAA Division I lacrosse history to earn first-team All-American honors at more than one position. He even won Most Outstanding Player at two positions, midfield in 1996 and attack in 1998. Powell followed Gary Gait in wearing the revered number 22 jersey at Syracuse University. His two younger brothers, Ryan and Mikey, carried on the tradition as well.

In 2001, Powell was signed by the Long Island Lizards of Major League Lacrosse (MLL), and led the Lizards to the first-ever MLL Championship. In 2003, the Lizards won the Championship again, and after the season, Powell was traded to the Rochester Rattlers in a five-player deal. During the 2004 season, Powell finished second on the Rattlers with 57 points (32 goals, 24 assists, 1 two-point goal).

Casey and his brothers sat out the 2009 MLL season, as they did not report to their teams as of April 1 contract deadline. Powell returned in 2011, and played for the Hamilton Nationals.

During the 2011 season MLL Championship game, Powell injured his knee and needed to be helped off the field, he had 4 goals in a 10-9 Nationals loss to the Boston Cannons in the MLL championship game, his lacrosse future in doubt. But just days later he announced that an MRI revealed no tear in his ACL, so the injury was not as serious as first thought.

After playing only three games in the 2012 season, Powell retired from the MLL, but was drafted by Chesapeake Bayhawks in the supplemental draft that year. He returned in 2013 and played with the Bayhawks.

Powell was the first overall draft choice of the Rochester Knighthawks of the National Lacrosse League (NLL) in the 1998 entry draft and played two seasons for the Knighthawks. He was traded to the Buffalo Bandits in 2001 and signed a contract, but never reported. In 2003, the Bandits traded him to the Anaheim Storm. Powell led the Storm in scoring and was named to the All-Star team in both the 2004 and 2005 seasons.

The Storm suspended operations after the 2005 season, and Powell was chosen second overall by the Portland LumberJax, although he elected not to play in the 2006 season. In September 2006, Powell was traded yet again, this time to the expansion New York Titans, and was named to the All-Star team in 2007, 2008, and 2009. Following the contraction of the Titans in 2010, the Boston Blazers acquired Powell in a dispersal draft.

After one year in Boston, the Blazers also went dark, and Powell was chosen by the Rochester Knighthawks in the resulting dispersal draft.

Powell has also hosted a weekly one-hour show on Sirius Satellite Radio called "Inside the NLL with Casey Powell" since 2007. 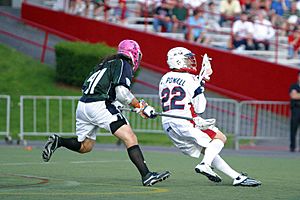 On June 18, 2022, Powell was inducted into the Professional Lacrosse Hall of Fame as one of the eleven members of the inaugural class of inductees.

All content from Kiddle encyclopedia articles (including the article images and facts) can be freely used under Attribution-ShareAlike license, unless stated otherwise. Cite this article:
Casey Powell Facts for Kids. Kiddle Encyclopedia.