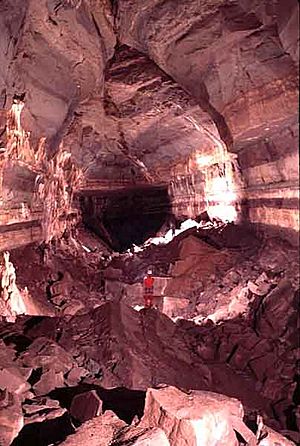 Cass Cave has the highest subterranean waterfall in West Virginia and Virginia, Lacy Suicide Falls, with a height of 139 ft. The cave is not open to the general public.

The June 1964 Issue of National Geographic featured a two-page fold-out color photograph by Huntley Ingalls of a caver climbing a wire ladder adjacent to the waterfall. The photo was illuminated by a series of #2 Press photo flashbulbs laid over an aluminum foil reflector spread on the slope below..

All content from Kiddle encyclopedia articles (including the article images and facts) can be freely used under Attribution-ShareAlike license, unless stated otherwise. Cite this article:
Cass Cave Facts for Kids. Kiddle Encyclopedia.