The cassowary plum can grow to about 30 metres. At the age of three years, it begins to produce white flowers during July, with red centers, which become the signature fruits. The fruit is egg shaped, large, smooth, and blue and ripens from January on.

Cassowaries commonly eat cassowary plums, hence the name. The plums' sap is poisonous to most animals, including humans, but not to cassowaries, which consume the fruit with no ill effects, because of their short and fast digestive system, which passes the fruit relatively intact. The cassowary's stomach also contains a unique combination of digestive enzymes, making it immune to the toxins. The cassowary and the cassowary plum have a mutually beneficial symbiotic relationship. The plum provides food for the cassowary, while the cassowary spreads the seeds of the tree. The bird eats the plums whole and passes them out mostly intact. The cassowary's stomach is said to massage the fruit, helping it grow. Cassowary plums are more likely to grow once they have been through a cassowary.

Another of the few animals that can eat the fruit is the white-tailed rat (Uromys caudimaculatus). However, it does not assist in the growth of the seeds as the cassowary does, as it tears all of poisonous skin off and feeds on the seeds within. 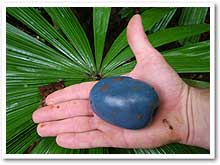 All content from Kiddle encyclopedia articles (including the article images and facts) can be freely used under Attribution-ShareAlike license, unless stated otherwise. Cite this article:
Cassowary plum Facts for Kids. Kiddle Encyclopedia.