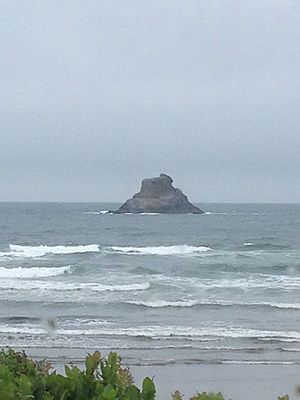 A view of Castle Rock from the east

Castle Rock is a large monolith right off the coast of Arch Cape, Oregon. It is named Castle Rock because it resembles a castle turret. The rock is Basalt, formed millions of years ago from lava flows.

It is sometimes called Queen Vic rock by locals, (referring to Queen Victoria) because on the west side, there is a rock pattern that loosely resembles the face of Queen Victoria.

All content from Kiddle encyclopedia articles (including the article images and facts) can be freely used under Attribution-ShareAlike license, unless stated otherwise. Cite this article:
Castle Rock, Clatsop County, Oregon Facts for Kids. Kiddle Encyclopedia.