The Castlemaine Brewery was opened in 1896 by Howard Norman Sleigh at Riverside Road in East Fremantle, Western Australia and boasted a successful trading history until 1927 when the company was taken over by the Swan Brewery. 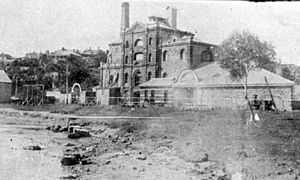 The Castlemaine Brewery was established in 1896 by Howard Norman Sleigh, with John Hugh Gracie (1855-1927) as head brewer. Gracie, who was born in Tasmania, was the chief brewer at Cascade Brewery prior to moving to Western Australia. In 1901 the Castlemaine Brewery was purchased by Gracie and Walter Frederick Walkley (1872-1936). In 1906 they purchased the nearby Phoenix Brewery. In 1910 Walkley returned to South Australia. In 1912 Gracie, the managing director of Castlemaine, retired. Castlemaine acquired a number of local hotels, including the Commercial and Beaconsfield Hotels in 1920, the Oddfellows Hotel in 1922, and the Richmond Hotel in 1925.

In 1927 the Castlemaine Brewery Co. was purchased by the Swan Brewery for £29,065 and 32,500 Swan Brewery shares. Swan subsequently closed the brewery, employing the majority of the workforce at the Perth operations.

The former brewery building was demolished to make way for the construction of the Stirling Traffic Bridge, linking Fremantle to North Fremantle.

All content from Kiddle encyclopedia articles (including the article images and facts) can be freely used under Attribution-ShareAlike license, unless stated otherwise. Cite this article:
Castlemaine Brewery, Western Australia Facts for Kids. Kiddle Encyclopedia.