Cascade Brewery is a brewery established in 1824 in South Hobart, Tasmania and is the oldest continually operating brewery in Australia.

As well as beer, the site also produces a range of non-alcoholic products. It is home to a function centre, as well as operating tourism related ventures including guided tours and a retail outlet.

The Cascade estate was originally a saw milling operation, run by a partnership called Macintosh and Degraves Sawmills. The mills began operation in 1825 and the brewery was founded beside the Hobart Rivulet in 1832 by Hugh Macintosh (1776–1834) with his nephews Henry and Charles Degraves while Peter Degraves was in Hobart prison serving a five-year sentence.

Until 2011 the conventional history of Cascade Brewery held that the brewery, and the other enterprises at Cascade, had been founded by Peter Degraves. However research by historian Greg Jefferys for his Masters thesis showed that the major partner in the Cascade Mills and Brewery had actually been Major Hugh Macintosh and that Degraves had falsified the history of the brewery after Macintosh's death in 1834.

Macintosh was a retired East India Company Officer who emigrated from England on his ship Hope in 1824 with his brother-in-law Peter Degraves (1778–1852). Degraves was an undischarged bankrupt and a convicted thief. In 1826 charges were laid against Degraves for debts incurred in England and he was taken into custody until 1832. As a result of Degraves' arrest Macintosh dissolved the partnership, paid all of the partnership's outstanding debts and took over the running of the sawmills with his two nephews as well as expanding his farming interests near New Norfolk.

After his release in 1832 Peter Degraves took over running and expanding the brewery on the property owned by himself and Macintosh. Macintosh moved to his farm on the banks for the Derwent River where he pursued his interests in viticulture and Merino sheep.

During this period supported Henry Savery, who wrote Australia's first novel. After Macintosh's death in December 1834, his half-share of the Cascade estate passed to his son William Macintosh who lived in Madras, India. Degraves offered to buy William's share but never paid his nephew, and William died a pauper in 1840, still owed a small fortune by his wealthy uncle Peter Degraves. After Macintosh's death Degraves continued to expand both the milling and brewing operations at the Cascade, exporting both timber and beer to mainland Australia, particularly to Victoria where the gold rush created huge demands for both timber and beer.

After Degraves' death Cascade passed into the control of his eldest son, Henry Degraves. However Henry Degraves died two years after his father and the management of the brewery passed to James Wilson, husband of Degraves' youngest daughter, Deborah Hope Degraves. It is now owned by Anheuser-Busch InBev, through its Australian subsidiary Carlton & United Breweries. Cascade produces a range of beers, apple cider ('Mercury Cider' brand) and non-alcoholic beverages including apple juice, blackcurrant syrup and carbonated beverages.

In 1967 the building housing the brewery was almost completely destroyed by the bushfires that devastated south-east Tasmania. With a rebuild to commence in no time at all, the brewery was back up and running a mere three months later.

The image adopted for its label in 1987, H. C. Richter's nineteenth-century illustration of the now extinct Tasmanian tiger (Thylacinus cynocephalus), is from Gould's The Mammals of Australia.

Cascade is unique among Australian breweries and rare among breweries worldwide in that it operates its own maltings, producing malt for its mainstream beers (including Premium Lager and Pale Ale) from locally grown barley. Specialty malts for dark beers and the seasonal range are imported from mainland Australia and from overseas. The Cascade name is also given to the sporting event 'The Cascade Cup'. 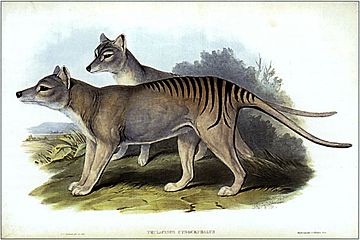 Featured on the label, the iconic illustration of the Tasmanian Tiger Thylacinus cynocephalus, J.Gould and H.C. Richter, in Mammals of Australia, vol.I, 1841.

This range was launched in September 2005, it consists of existing products with more focused marketing and labeling. There was a further major overhaul of the brand in 2010.

These beers are only available in Tasmania.

Cascade has also produced an annual premium beer since 2002, "First Harvest", which has an extremely limited production. "First Harvest" refers to the first yield of Tasmanian hops, in which the actual unkilned hops flowers are used for the brew. First Harvest, which is brewed to a different recipe every year, is brewed as an ale.

From 2003 until the launch of Degrave's collection Cascade produced a range of seasonal beers:

The non-alcoholic range of products (Cascade Beverages) was acquired by Coca-Cola Amatil in the third quarter of 2013.

All content from Kiddle encyclopedia articles (including the article images and facts) can be freely used under Attribution-ShareAlike license, unless stated otherwise. Cite this article:
Cascade Brewery Facts for Kids. Kiddle Encyclopedia.