Burswood is an inner southeastern suburb of Perth, Western Australia, located immediately across the Swan River from Perth's central business district (CBD). Its local government area is the Town of Victoria Park. Burswood is the location of the State Tennis Centre, Perth Stadium, Belmont Park Racecourse, and the Crown Perth casino and hotel complex.

Burswood developed as two separate entities - the Burswood Island region, and the southernmost part which was part of Victoria Park until the 1990s.

Henry Camfield, who emigrated from England to the Swan River Colony in 1829, with two indentured servants and their families, was granted 1,000 acres (4.0 km2) of land opposite Claisebrook. Camfield named the estate after his father's farm, Burrswood, near Groombridge in Kent.

The area was a low-lying peninsula leading to a ridge and steep, sandy hill with scrubland beyond. The peninsula became Burrswood Island in 1841 when Burswood canal was cut to offer a more direct route to Guildford, which had previously been encumbered by mud flats. By this time, the land was earning income and Camfield let it to tenants until he sold it in 1871. A statue of Henry Camfield is located in Burswood Park surrounding the entertainment complex today.

During the 1890s, the railway including the Bunbury Bridge to Armadale was built through the area. The current spelling of Burswood was a result of a misspelling on the station signage. Western Australia's first golf course (9-hole) was built at Burswood Island in 1895 - the clubhouse was a mud hut - and in 1899 a racecourse was also built. In 1902 it became the Belmont Park Racecourse, and in 1906 the Goodwood railway station, which later became Belmont Park railway station opened.

From 1900 until 1943 there were two racecourses Goodwood and Belmont Park, but Western Australian Turf Club bought both over and closed the second one down.

Efforts were made to establish a residential district at "Riversdale Estate", but the use of Burswood Island as part of a sewerage filtration system (1906-1934) and the existence of various light industries from the 1910s onward worked against development. Residents in the area requested a change of name and in 1921, the name Rivervale was adopted.

In 1985, the development of the Burswood Island Resort, including a casino, rehabilitated the name and the suburb was gazetted as Burswood in 1993, also including the residential area of Victoria Park south of Burswood Road. 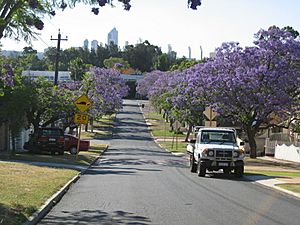 Burswood is bounded by the Swan River to the west, north and north-east; Graham Farmer Freeway, Great Eastern Highway and the Armadale railway to the east, and Shepperton Road and Harper Street to the south. Only a small section between Shepperton Road and the railway line is residential, although a new estate is being constructed near the resort and golf course.

At the ABS 2001 census, Burswood had a mostly above-average-income white population of 966 people living in 586 dwellings, many of which are townhouses or flats. About 15% of the population were of East or South-East Asian origin. Several apartment blocks exist on Hampton Street.

The Perth-Armadale rail line runs through this area and is serviced by the Burswood Train Station. Buses from the Victoria Park transfer station and along Great Eastern Highway and Craig Street service the area. All services are operated by the Public Transport Authority.

A courtesy shuttle bus operated by the Burswood Resort ferries passengers between the train station and the Burswood Entertainment Complex.

All content from Kiddle encyclopedia articles (including the article images and facts) can be freely used under Attribution-ShareAlike license, unless stated otherwise. Cite this article:
Burswood, Western Australia Facts for Kids. Kiddle Encyclopedia.