Canning Vale's name derives from the Canning River, located about 3 km to the suburb's northeast. It was locally known as North Jandakot until 1925.

Until the late 1970s Canning Vale was a farming area consisting of mostly market gardens and dairy farms due to its swampy terrain with an unusually high abundance of permanent fresh water. Most of the area which is now residential was zoned rural until 1994 on the Metropolitan Region Scheme.

Developers of residential areas have incorporated numerous landscaped lakes into their developments, which serve an important function in draining this swampy area.

The suburb is split into three distinct regions. North of the rail line near Roe Highway is an industrial area that has a number of major warehousing operations including Market City, a wholesale fresh produce market. Also in the area are many distribution facilities such as the IGA distribution centre. Swan Brewery, ACI Packaging and BGC all operate manufacturing plants in the area. South of the line is residential with the normal shopping areas. The western edge of the suburb, contained within a nature reserve, is the Hakea Prison complex. 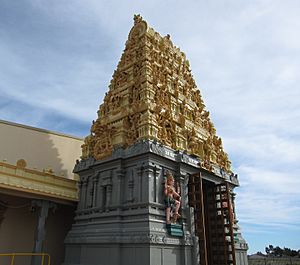 At the ABS 2001 census, Canning Vale had a mostly lower-middle income population of 12,849 people living in 4,115 dwellings, all but 205 of which were separate houses. The population is very diverse, with 14% of East or South-East Asian descent and sizable Indian and Italian minorities.

At the ABS 2011 census, the suburb had a population of 30,666 while still maintaining its ethnic and religious diversity; 15% of the suburb was of either Chinese or Indian ancestry, and Buddhism and Islam were the fourth and fifth most practised beliefs in the suburb respectively (after Catholicism, no religion and Anglicanism).

Canning Vale contains five retail precincts, four within the residential areas. A large industrial area is located in the north-west.

Season 2011 sees the newly formed Canning Vale Senior Football Club take to the field for the first time as they participate in the WA Amateur Football League (WAAFL). Their home matches will be played at Clifton Park.

The section of Canning Vale to the north of the Nicholson and Warton Road intersection contains Hakea Prison, Melaleuca Remand and Reintegration Facility and Banksia Hill Juvenile Detention Centre.

Canning Vale's northern boundary is the Roe Highway, which connects with the Kwinana Freeway (west) and Albany Highway (east) and provides access to Perth Airport, while Nicholson Road heads north towards Cannington, Western Australia and Westfield Carousel, and Ranford Road goes to Armadale (southeast) and Fremantle over Kwinana Freeway via South Street (northwest).

Canning Vale is served by a range of buses linking the area to the Perth CBD, Murdoch University and to Cannington. Many bus services connect with Transperth trains at Murdoch, Maddington or Thornlie stations. All services are operated by Swan Transit.

All content from Kiddle encyclopedia articles (including the article images and facts) can be freely used under Attribution-ShareAlike license, unless stated otherwise. Cite this article:
Canning Vale, Western Australia Facts for Kids. Kiddle Encyclopedia.