Maylands is a riverside inner-city suburb approximately 4.5 kilometres (2.8 mi) northeast of Perth centred on the Midland railway line on the northern bank of the Swan River.

The suburb was developed during the 1890s and is an administrative locality within the City of Bayswater (having been mostly within the City of Stirling until 1998), bordered by the suburbs of Mount Lawley, East Perth and Bayswater. Maylands railway station provides easy access to the City centre and beyond. The railway line was originally built in the 1880s, and the railway station was extensively refurbished in 2000. Recently a shared bicycle / pedestrian path was built to link Maylands with neighbouring suburbs via the shoreline of the Swan River. There is also a small yacht club and a golf course.

Maylands was once a source of clay for brick and tile making at Maylands Brickworks, and the pits from these activities are now part of a golf course and residential area. It was home to Perth's main airport which serviced many kinds of aircraft and even flying boats until the early 1960s, when the airport moved to Perth Airport. The facilities were then converted to a training area for the Western Australian Police Service.

Over recent years, Maylands' revitalisation has gathered significant momentum, with a variety of new developments and businesses bringing new residents and vibrancy to the town centre. New bars, cafés and restaurants, along with gourmet food and retail outlets have all contributed to an ongoing transformation of the Maylands town centre into a lively, diverse and inclusive destination.

Maylands continues to evolve as a cultural and creative hub, with the relocation of the Western Australian Ballet to the former Western Australian Institute for the Blind building on Whatley Crescent in 2012. Estudio Nuevo, Studio 281, Swallow Bar and the Maylands Hawkers Markets each provide a variety of music, performance, dance, artistic, cultural and culinary experiences that exemplify Maylands' unique creative and community flavour.

The West Australian Ballet Centre is situated on the historical site of the former Blind Institute in Maylands. The history of the building site dates back to 1897 when the Victoria Institute and the Industrial School for the Blind was developed as a part of the celebrations for the 60th year of Queen Victoria’s reign.

This magnificent building has become a symbol that illustrates Perth’s short history. With its high ceilings, rustic wooded floors, classical charm and character, the building sets a perfect tone for the West Australian Ballet. The building’s disposition provides the artistic team with a creative and innovative backdrop to aid in the creation of world class productions.

The recent Council approval of the Lyric Lane Bar and Café will see the establishment of a purpose built venue consisting of a bar, cafe and a live music basement, which will provide for new cultural pursuits in the town center. The project is now in the construction phase and due to open mid 2018.

It has recently been announced that the Western Australian Youth Jazz Orchestra will soon take up residence in the old Maylands Hall at the corner of Eighth Avenue and Guildford Road.

A variety of community groups including Creative Maylands, Local Arts and Community Events Inc (LACE), Maylands Residents and Ratepayers Association, Maylands Historical and Peninsula Association (Inc) and Maylands Business Association provide a supportive backbone of active and passionate community members who seek to ensure that the values of the Maylands people are reflected both in its present and future.

Since October 2010, Creative Maylands has been managing and supporting activities that creatively enrich the Maylands neighbourhood. They aim to connect people and ideas to help make Maylands a great place to live, work, and visit.

The association has a strong group of local businesses working together to improve Maylands and make it a destination venue for the community and the promotion of business interests, The group is active with Council and State Government to help form policies consistent to their vision for Maylands.

The City of Bayswater's RISE (Recreation, Information, Socialising and Entertainment) was opened in July 2011 and replaced the former Alma Venville Centre with a larger, more contemporary facility. The RISE is a multi purpose community centre that includes a library, gymnasium, cafe, creche, dry courts, function rooms, meeting rooms and a community hall.

The Maylands Yacht Club is located on the Swan River on the Maylands foreshore. The MYC is a family oriented club, with a strong emphasis on enjoyment and helping those who want to learn to sail. The Club sails a variety of classes from the single handed Laser, Sabre and Spiral, to a number of two-handed dinghies including Mirrors and 125s, and the popular trailer-sailer Hartley TS 16.

The Maylands Tennis Club is a boutique grass court club in a secluded location on the Maylands Peninsula, overlooking the Swan River. The Club operates all year round, with 14 grass courts and 3 hard courts (four grass courts over the winter months). The club provides for competitive tennis for players of a wide range of abilities and is renowned for its social activities year-round.

In 1896 the name "Maylands" was first used to identify the area, appearing on a poster advertising a land auction. However the exact reason how the area got its name is something of a mystery. One theory is that Mephan Ferguson (owner of the local foundry) was responsible for naming the area, in honour of his aunt and daughter whom were both named May. Another theory is the area was named by Edgar. W. Hamer (Golds Estates of Australia) after he inspected land in the locality sometime in the month of May. 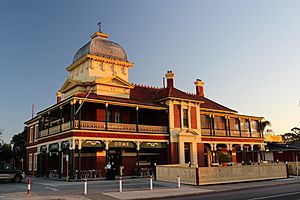 The Peninsula Hotel is located on Railway Parade in Maylands, Perth. The hotel was built in 1906 by well known building contractor, Friederich Wilhelm Gustave Liebe. 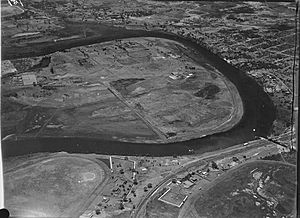 Maylands Airport was where Charles Kingsford-Smith made his landing to complete the first non-stop flight across Australia. On 8 August 1928, the "Southern Cross" took off from Point Cook near Melbourne and set course for Perth, a distance of over 3,200 kilometres (1,990 mi). The first part of the flight Kingsford-Smith described as rather dull, while the second part was made thoroughly unpleasant by a cloud cover their heavy machine couldn't rise out of. For hours they endured the bitter cold and when daylight finally came, they discovered that they had drifted off course to Bunbury, 180 kilometres (112 mi) to the south. After their arrival at Maylands airport they found that summer rains had turned the field more or less into a swamp.

During World War II, Maylands Airfield was requisitioned by the Royal Australian Air Force (RAAF). From February 1942, it was also used by the United States Army Air Forces for refuelling and aircraft ferrying purposes. Between 6 April 1942 and 5 August 1943, No. 35 Squadron, flying Avro Ansons, was based at Maylands to transport supplies and passengers to Allied units throughout Western Australia, as well as supporting the Royal Australian Navy and the Australian Army. 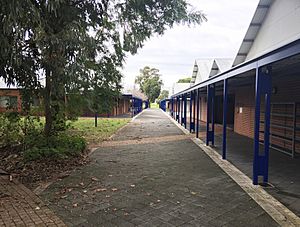 There are no secondary schools in Maylands, but the suburb is within the local intake areas of John Forrest Secondary College and Mount Lawley Senior High School.

All content from Kiddle encyclopedia articles (including the article images and facts) can be freely used under Attribution-ShareAlike license, unless stated otherwise. Cite this article:
Maylands, Western Australia Facts for Kids. Kiddle Encyclopedia.