Kids Encyclopedia Facts
Not to be confused with Bedfordale, Western Australia.

Bedford is a suburb 6 kilometres (4 mi) north-east of the central business district (CBD) of Perth, the capital of Western Australia. Named after Frederick Bedford, the Governor of Western Australia from 1903 to 1909, the suburb is within the City of Bayswater local government area. It is predominantly a low density residential suburb consisting of single-family detached homes, with clusters of commercial buildings along Beaufort Street, Grand Promenade and Walter Road.

Before European settlement, the area was inhabited by the Mooro group of the Whadjuk Noongar people. The first major developments for the suburb occurred in the 1920s, when the extension of Beaufort Street and its associated tram service into the area triggered housing construction. Bedford Park was gazetted as a townsite in 1937, and major growth occurred following World War II, due to developments by the State Housing Commission. Today, Bedford is fully suburbanised.

Major roads that travel through or along the edge of the suburb are Beaufort Street, Coode Street, Grand Promenade and Walter Road. Major parks include Beaufort Park, RA Cook Reserve and Grand Promenade Reserve, which are used for various sports including Australian rules football, cricket and soccer.

The median weekly household income was $1,779, which is higher than the state and the country, which are at $1,595 and $1,438 respectively. Major industries that residents worked in were hospitals (4.8%), cafes and restaurants (4.0%), state government administration (3.0%), primary education (2.7%) and engineering design and engineering consulting services (2.1%). 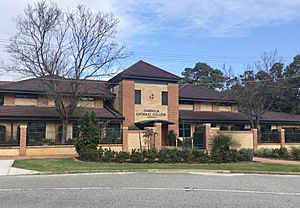 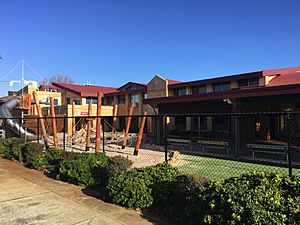 St Peter's Primary School is a Catholic primary school located on Wood Street. It has approximately 700 students in three streams from Kindergarten to Year 6. The school first opened in 1941, occupying a single house. The school moved down the street to its current site in 1942. Expansions occurred in the 1950s, and in 1957, a secondary school for girls named St Thomas Aquinas College opened on the same site. The two schools would undergo significant improvements and renovations over the decades that followed.

Cars are the most popular mode of transport in Bedford. The 2016 Australian census said that 61.0% of residents travelled to work in a car. However, bus usage is significantly above the state average. 10.0% of Bedford residents said they take the bus to work compared to 3.9% of Western Australians. 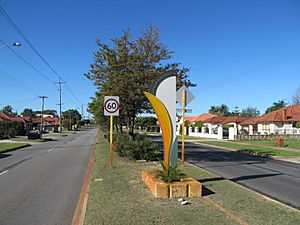 Major roads that go through or along the edge of Bedford are Beaufort Street, Coode Street, Grand Promenade and Walter Road. All these roads aside from Coode Street have two lanes in each direction and a speed limit of 60 kilometres per hour (37 mph). Beaufort Street is the suburb's main link to the Perth central business district. It also links to Morley and areas further east. Coode Street links to the Bayswater town centre and Guildford Road. Walter Road links to the surrounding suburbs. Grand Promenade links to Dianella Plaza and Morley Drive in the north-west, and Garratt Road in the south-east. Garratt Road leads to Guildford Road and across the Swan River at the Garratt Road Bridge. 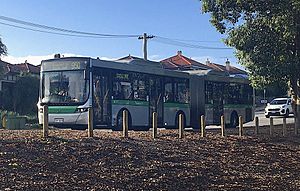 Along Beaufort Street, Bedford is served by Transperth routes 66 and 950, both of which travel between Morley bus station and the Perth central business district. The 950 continues through Elizabeth Quay bus station to connect to the University of Western Australia and the Queen Elizabeth II Medical Centre, whereas route 66 terminates at Perth Busport and is a limited stops route. Routes 998 and 999, also known as the CircleRoute travel along Coode Street and Walter Road, deviating off to Morley bus station. These routes link to Bayswater railway station in the south and Dianella shopping centre in the north. Route 60 travels along Walter Road, linking to Morley bus station and Elizabeth Quay bus station. Route 67 travels along Grand Promenade towards Mirrabooka bus station and along Beaufort Street to Perth Busport. Route 68 takes a similar path, but deviates along Craven Street and various other minor roads in Bedford. It winds its way through other suburbs towards Mirrabooka bus station.

All content from Kiddle encyclopedia articles (including the article images and facts) can be freely used under Attribution-ShareAlike license, unless stated otherwise. Cite this article:
Bedford, Western Australia Facts for Kids. Kiddle Encyclopedia.