Embleton is a suburb of Perth, the capital city of Western Australia, located 7 kilometres (4.3 mi) north-east of the central business district, between the suburbs of Morley and Bayswater. Its local government area is the City of Bayswater.

The area developed during the early 20th century as a rural district on the outskirts of Perth, characterised by five-acre lots with a number of self-built houses. From the late 1950s, much of the land was resumed by the State Housing Commission, to be resubdivided and developed for detached suburban housing, which continues to typify the area.

The name Embleton honours an early settler, George Embleton, who arrived in 1829 as a servant of Dr John Watley, who had settled in the Bayswater district.

Embleton is bounded by Broun Avenue (the continuation of Beaufort Street) to the west and north and Beechboro Road to the east.

The suburb contains a primary school, water leisure centre and a golf course. Wotton Reserve, which includes a skate park and a soccer pitch, is located in the suburb's northeast. John Forrest College and Hillcrest Primary School are just beyond the suburb's southwestern boundary. 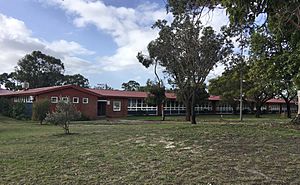 The sole school located in Embleton is Embleton Primary School, a public primary school for students from Kindergarten to Year 6. Hillcrest Primary School and John Forrest Secondary College are located adjacent to the suburb's western boundary.

Embleton is served by Transperth routes 48, 66, 341, 342, 345, 950 and 955. When the under-construction Morley–Ellenbrook railway line opens in 2023, Embleton will be served by Morley railway station, located at the Broun Avenue flyover at Tonkin Highway.

All content from Kiddle encyclopedia articles (including the article images and facts) can be freely used under Attribution-ShareAlike license, unless stated otherwise. Cite this article:
Embleton, Western Australia Facts for Kids. Kiddle Encyclopedia.