She is coached by Simon Cusack at the Commercial Swimming Club.

Cate is the first of five children born to South African parents, Eric, an accountant, and Jenny, a nurse. She has four younger siblings (three sisters and one brother): Bronte, Jessica, Hamish, and Abigail. Her brother Hamish has severe cerebral palsy and requires around-the-clock care.

Jenny used to be a swimmer and taught her three daughters to swim, in the pool at the family's home. Cate also recalls swimming near Hippopotami in Lake Malawi as a small child. It was in this lake that her father, Eric, would go sailing on weekends. Campbell and her siblings were homeschooled as children. Her mother also frequently read the Bible to her, while she was growing up. The Campbells lived in a big house, with no TV. They had many pets, including turkeys, guinea pigs, dogs, cats, and chickens. Campbell describes every morning like "an Easter egg hunt; the chickens would lay eggs all around the house."

During her schooling, Campbell states she could not sing or dance, but swimming was something in which she excelled. She also stated she received top marks for public speaking at school. Aside from those, she claims she was an "average student".

The Campbells moved from Malawi to Australia in 2001 and it was soon after this that Campbell took up competitive swimming. She completed her secondary school studies at Kenmore State High School in Brisbane, Queensland. Her sister Bronte is also an Olympic swimmer and the pair competed in the same event at the 2012 Summer Olympics.

Despite doing a time trial of 53.40 seconds, with her 100-metre performance of 56.39 from 5 months earlier in March and having hip problems, she was scratched from the women's 4 × 100 metre freestyle. However, she still earned the right to swim the 50 metre freestyle from her runner-up swim at the world championships trials. In Rome she finished with a bronze, beating compatriot Libby Trickett and ending 0.02 of a second off the Commonwealth Record.

Campbell was a member of the Australian team that won the gold medal in the 4 × 100 metre freestyle relay at the 2012 Summer Olympics in London. In the women's 50 metre freestyle she and her sister Bronte swam in the same heat, finishing third and second respectively, and qualifying for the semi-final in tenth and ninth place respectively.

At the 2013 Australian Swimming Championships she won gold in both the 50 and 100 metre freestyle events, qualifying for the 2013 World Aquatics Championships. At the World Championships, she teamed up with her sister Bronte, Emma McKeon and Alicia Coutts in the 4 × 100 metre freestyle relay where they won the silver medal, finishing 0.12 of a second behind the American team. On the sixth day of competition, Campbell won the 100 metre freestyle world title with a time of 52.34 seconds. Campbell finished ahead of Sarah Sjöström of Sweden and defending Olympic champion, Ranomi Kromowidjojo. 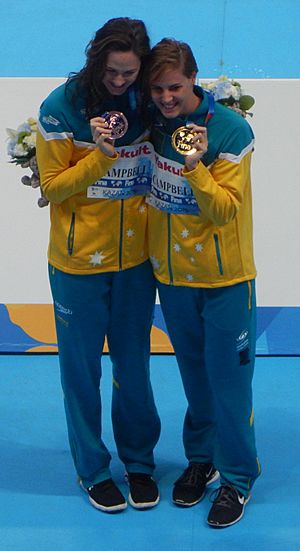 Cate Campbell (left) and her sister Bronte at the 2015 World Aquatics Championships.

At the 2016 Australian Swimming Championships she won the 100 metre freestyle to qualify for the 2016 Summer Olympics. She broke the Australian record in the 50 metre freestyle in the semifinals with a time of 23.93, which was the fastest time ever in a textile swimsuit. She went on to win the final and qualify for the Olympics in the 50 metre freestyle, improving her time to 23.84. In addition, Campbell also qualified for the Olympic team in both the 4 × 100 m freestyle (winning gold in a new world-record time) & 4 × 100 m medley relays. At the 2016 Australian Grand Prix meet, she broke the long course 100 metre freestyle world record in a time of 52.06. This was 0.01 seconds faster than the previous world record set by Britta Steffen during the super suit era.

At the 2016 Summer Olympics Campbell won a gold medal as a member of the Australian women's 4 × 100 m freestyle team. The team, which included Campbell's sister Bronte, set a world record time of 3:30.65. This was followed by a silver medal as a member of the women's 4 × 100 m medley team. In the Olympic final of the 100 m freestyle, Campbell was the favourite, however after leading at the first turn, she finished 6th in 53.24, despite breaking the Olympic record in the heats and semifinals with times of 52.78 and 52.71, respectively. She narrowly missed a medal in the 50 m freestyle final, finishing 5th.

After the Rio Olympics, Campbell took 2017 off from swimming competitively in order to recover from disappointment. She used most of the year to do "normal things" other people her age might do, taking her first real break from training since the age of 9. At the 2017 Australian Short Course Swimming Championships she broke the 100 metre freestyle world record in a time of 50.25, improving the previous mark by 0.33 seconds.

Campbell returned to competition for the Gold Coast Commonwealth Games, winning gold and breaking the world record in the women's 4 × 100m freestyle relay, alongside sister Bronte, Emma McKeon and Shayna Jack. She then won gold for the women's 50m freestyle, with a time of 23.78, breaking a Commonwealth record. She also won gold for the women's 50m butterfly, despite having no prior experience in the stroke. She stated she opted for the event to "shake things up" and "to try something new and different". Campbell claimed the silver medal for the 100m freestyle with a time of 52.69, touching behind her sister Bronte, who had a time of 52.27.

Campbell qualified for 4th Olympics, Tokyo 2020, becoming the third Australian swimmer to do so, after Leisel Jones and Emily Seebohm. On 7th July 2021, she was announced as one of Australia's flagbearers for the Opening Ceremony, alongside basketball player, Patty Mills, and becoming the first Australian female swimmer to do so. Alongside Emma McKeon, Meg Harris, and sister Bronte, Campbell won gold in the women's 4 x 100m freestyle relay, again breaking Australia's previous record. This also marked the 3rd time Campbell has won gold in the same event. She then went on to win the bronze medal in the 100m freestyle, behind Emma McKeon (gold) and Hong Kong's Siobhan Haughey (silver).

On day 9 of the Olympics, Campbell finished 7th in the 50m freestyle final. Half an hour later, she and the Australian team won gold in the women's medley relay, alongside Kaylee McKeown, Chelsea Hodges and Emma McKeon.

In 2015, Campbell opened up about her struggles with body image. She confessed that pressure from TV and magazine models made her want to be skinny, however it reached the point where she was getting sick. She read a chapter in Michael Phelps' book Beneath the Surface, where the line "skinny swimmers aren't good swimmers" stuck out in her head. Her mother encouraged her to see a dietitian, and now believes "the sum of your worth is so much more than what you look like".

Campbell has previously identified as Christian. In 2010 and 2011, she came down with glandular fever and was unable to compete. She realized she could not base her identity on her swimming career, as it always has inconsistencies. Instead, she believed she needed to rely on God for her "strength and love" who "helps me look past the here and now and look toward the future that I will share with Him (in heaven) someday." At the time she was attending a local Baptist church in Brisbane.

Since 2011, Campbell has been studying a degree in Mass Communication at Queensland University of Technology. She has stated that she wants to pursue a career that combines her interest in the media industry with her love of sport, when she retires. She is a member of the QUT Elite Athlete program.

Until December 2016, Campbell lived with her sister Bronte. As of 2017, they are no longer housemates. She subsequently bought a house in Morningside, Queensland.

She is a supporter of Nexus Care, a not-for-profit organisation, that aims to improve the lives of those living in poverty in the northern suburbs of Brisbane.

In November 2018, Campbell revealed she had been diagnosed with a stage one melanoma that developed in a mole she had had her whole life and had to get it removed. She urged her fans to get regular skin checks, stating "an hour out of your day once or twice a year is all it takes". She has since been praised for raising awareness of skin cancer.

All content from Kiddle encyclopedia articles (including the article images and facts) can be freely used under Attribution-ShareAlike license, unless stated otherwise. Cite this article:
Cate Campbell Facts for Kids. Kiddle Encyclopedia.